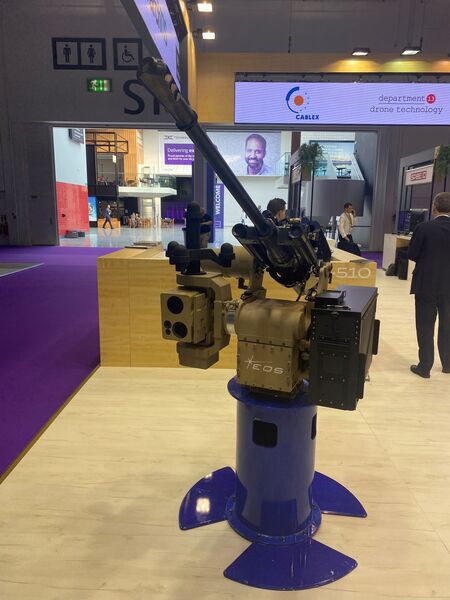 The Venom LR was unveiled mounted on an EOS R400 ROWS at DSEI 2021. (Janes/Riccardo Cociani)

The system is a ground-up new design and represents the culmination of work conducted by the two companies since 2019.

Simon Angel, AEI Systems chairman and managing director, told Janes that the Venom LR was designed to compete with the Northrop Grumman M230LF (Link Fed) cannon, with one advantage being that it is an International Traffic in Arms Regulations (ITAR)-free solution. He added that the new gun also features a remote gun loaded, rounds fired, and rate-of-fire indicator.

Angel saidthat development of the cannon “took much longer than we thought”, with the electro-mechanical cocking mechanism proving to be “complicated”, for example. Before showcasing the final end-product, AEI Systems developed five design iterations over six months.

At 122 kg, the Venom LR is not lightweight but still within its design parameters. Angel said that, whereas further weight reduction was desirable, it was “getting more and more difficult” to achieve, albeit still possible.

Despite this, Angel said that the Venom LR “will always be cost competitive within the market” but provided no details about the cannon's price.