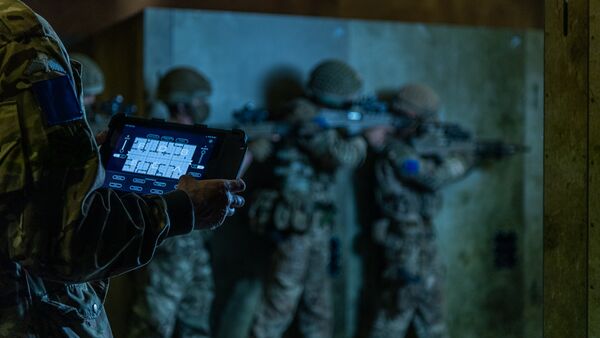 4GD has been selected by Landmarc Support Services to provide its SmartFacility training systems to the British Army. (4GD)

The UK's 4GD, a company specialising in close-combat immersive training, has been selected by the country's national training estate prime contractor Landmarc Support Services to install a series of its Level 2 SmartFacilities at British Army bases under the Urban Fighting Skills House framework, according to a 16 September company press release.

“The facilities will consist of our SimWall system and 4GAV special effects and video monitoring system,” James Crowley, 4GD's business development manager, told Janes on 16 September. The first facility, which enables infantry sections to practise room clearances and other close-quarter battle (CQB) drills, is to be installed at Catterick Garrison from 2022.

The training facilities are being installed as part of the British Army's Collective Training Transformation Programme, which is designed to address the need for training that is adapted to the evolving nature of warfare.

In March 2021 4GD completed the installation of a platoon-sized Level 2 SmartFacility at the base of the British Army's 16 Air Assault Brigade in Colchester. The British Parachute Regiment has since made extensive use of the facility including vast quantities of sim-ammunition, according to Crowley.

SimWall is a reconfigurable modular panel system that enables thousands of room and building configurations to be arranged within a single space. If SimWall is used alone, it represents a Level 1 SmartFacility. The introduction of 4GAV – a special effects and video monitoring system including smoke, light, and sound – creates a Level 2 SmartFacility.

The UK's 4GD, a company specialising in close-combat immersive training, has been selected by the co...