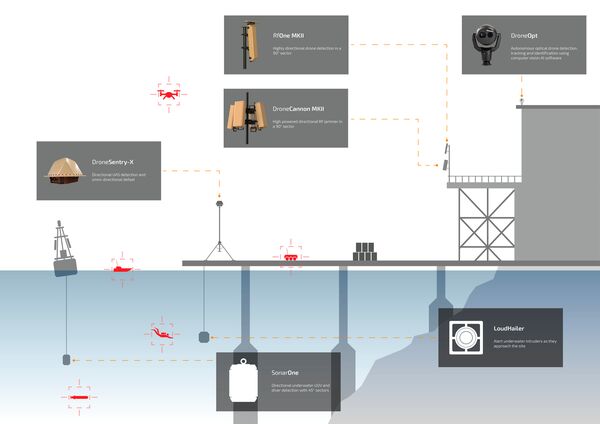 DroneShield has expanded its range of C-UAS products with the SonarOne system, its first underwater detection device. (DroneShield)

SonarOne was announced in early September and is part of the company's DroneSentry autonomous fixed suite of sensors and countermeasures, which also incorporates radar and company technology like DroneOpt cameras and RfOne RF detectors. The sonar and other DroneSentry sensors can also be used with the company's DroneOptIde AI-driven computer vision technology.

SonarOne can be deployed underwater as part of a DroneSentry suite at a port or a harbour as a node within a multisensory suite. It can also be used as a standalone system and can be deployed from ships as well as fixed sites.

The new product is the first sonar device developed by DroneShield, which has until now largely focused on threats like unmanned aerial vehicles (UAVs) and electronic warfare (EW).

DroneShield CEO Oleg Vornik said the company “has been getting expressions of interest from some of our customer base, who were concerned about that side of the market”. While its existing detect and defeat devices can detect unmanned aerial, ground, and surface vehicles, the underwater sector is a new focus.

Vornik told Janes that there is a growing awareness of the potential threat posed by hybrid unmanned systems that could potentially fly in the air before landing on water and diving beneath the surface.