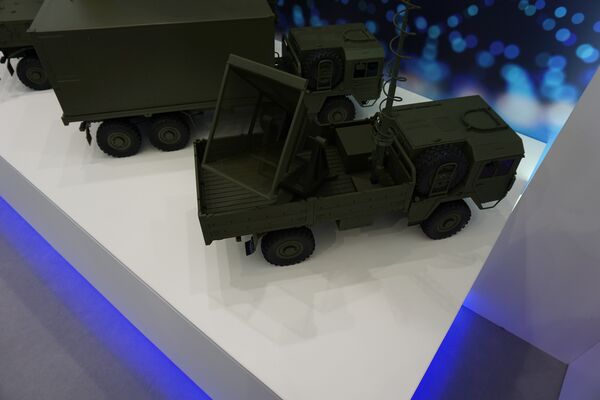 A scale model of the HPEM SkyWolf effector, shown in its truck-mounted configuration. (Janes/Mark Cazalet)

Diehl Defence has been awarded a contract for the delivery of the HPEM (High-Power Electromagnetic) SkyWolf counter-small-unmanned aerial vehicle (UAV) system by an undisclosed customer in Africa.

The HPEM SkyWolf consists of a pulsed high-power radio-frequency (RF) effector combined with a barrage jammer system, and is capable of variable defeat modes against small UAVs depending on the range at which it is employed. The system can be integrated with a variety of user-defined sensors to locate targets. Typical options include automatic target recognition-enabled day cameras, IR sights, direction-finders, or radars.

Once the targets have been detected and tracked, SkyWolf's effector is free to carry out engagement with its high-power radio wave effector, which consists of an RF signal pulse generator linked to a large horn antenna. The RF effector emits a pulsed high-power electromagnetic (EM) field to defeat UAVs, and can also provide a jamming effect in the industrial, scientific, and medical (ISM) radio band. A separate global navigation satellite system (GNSS) jammer is also available, if required, to ensure a more predictable jamming effect at various ranges.

The average emitted energy of the pulses from the SkyWolf system is relatively low. According to a Diehl representative, the system does not pose a threat to biological life and has a low risk of causing collateral damage to friendly aircraft. Multiple targets can be engaged simultaneously because of the relatively wide lobe of the effector. This enables the system to engage UAV swarms.

Diehl Defence has been awarded a contract for the delivery of the HPEM (High-Power Electromagnetic) ...