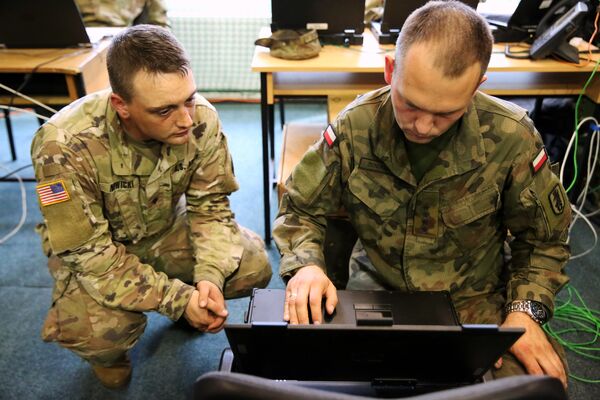 A US Army soldier and a Polish army officer establish an expeditionary network during exercise ‘Saber Strike' at Drawsko Pomorskie Training Area, Poland. (US Department of Defense)

The Pentagon's intelligence directorate is investing heavily in systems and programmes specifically designed to knock down barriers to collaboration between US armed forces, allies, and partner countries across all strata of command, senior Pentagon and military officials said.

Increasing capabilities to foster increased collaboration between the Pentagon and its allies, from an information-sharing and technology perspective, has emerged as a priority for the department's intelligence directorate. “I am really focusing on [improving] international systems,” said Doug Cossa, chief information officer for the Defense Intelligence Agency (DIA).

“Whether it's the situation [in] Ukraine or others around the world, everything is done alongside of our foreign partners,” Cossa said during a briefing sponsored by the Intelligence National Security Alliance. “We really become one community for sharing knowledge, sharing intelligence, but also creating intelligence. And the linchpin behind that, what brings it all together”, is a robust, collaborative information-sharing environment between the US and its allies, he said.

DIA officials at the direction of the Office of the Director of National Intelligence (ODNI) stood up a digital data-sharing programme with members of the 'Five Eyes' international intelligence consortium, Cossa said. Five Eyes members include Australia, Canada, New Zealand, the United Kingdom, and the United States. The programme primarily focused “on collaboration services … things like file sharing [and] chat”, Cossa added.

While the ODNI-directed effort went a long way towards addressing challenges “on the things we take for granted” such as online chat and shared email databases, Cossa said actual integration of disparate data collection and intelligence-sharing environments among allies remained elusive.

The Pentagon's intelligence directorate is investing heavily in systems and programmes specifically ...