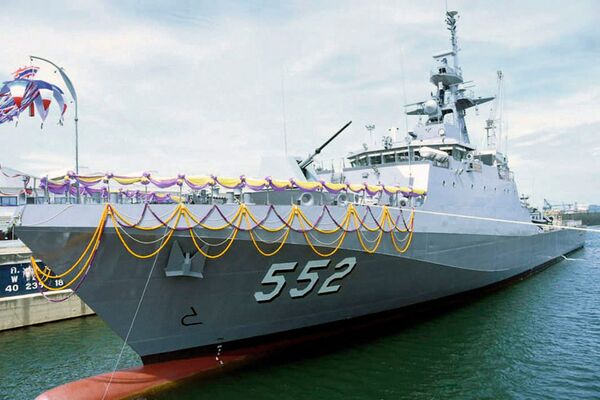 Bangkok Dock is proposing a modified version of the 90 m Krabi-class OPV for the Royal Thai Navy. The company has built two Krabi-class vessels for the RTN, with the second vessel, HTMS Prachuap Khiri Khan , pictured above at its launch. (Royal Thai Navy)

Bangkok Dock shipyard is proposing a series of modified Krabi-class offshore patrol vessels (OPVs) to meet requirements in the Royal Thai Navy (RTN). The proposals are being developed in collaboration with BAE Systems, the designer of the 90 m River-class OPV on which the Krabi-class vessels are based.

The RTN took delivery of two Krabi-class OPVs in 2013 and 2019. They were constructed by Bangkok Dock in co-operation with BAE Systems. The new proposals consider extending the length of Krabi-class OPVs to various possible specifications as well as adding new capabilities.

A Bangkok Dock spokesperson told Janes at the Defense & Security 2022 show in Bangkok that the company plans to offer a series of Krabi-class options to the RTN that could extend the length of the vessel to 91 m, 94 m, or 111 m.

The options are being made available to the RTN to meet a requirement for an additional four OPVs and other programmes as well. Referencing the 111 m option, the spokesperson said, “This could potentially take the existing Krabi-class OPV design and position the vessel for a light frigate requirement.”

However, the proposed modified version of the Krabi-class is not just about extending its length, he said. “This is a highly configurable platform,” the spokesperson added. “The flexibility with the modified design enables the integration of additional weapons, sensors, and systems according to RTN requirements.”