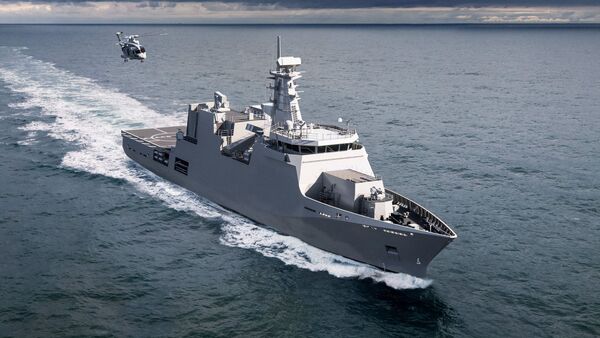 A computer-generated image of the Pakistan Navy's OPV 2600 vessels, which are being built by Damen. (Damen)

Netherlands-based shipbuilder Damen has disclosed further details of the vessels it is building for the Pakistan Navy, which are derived from the company's OPV 2600 design.

The first of the two vessels, which are a follow-on order to the country's Yarmook-class patrol vessels, was laid down on 15 July at the Damen shipyard in Galati, Romania.

The Pakistan Navy has not disclosed details of the contract it has signed with Damen for these vessels, and the programme to procure follow-on vessels to the Yarmook class was only made known at the steel-cutting ceremony.

The Pakistan Navy operates a fleet of two Yarmook-class patrol vessels that were commissioned in February and November 2020, respectively. The vessels, PNS Yarmook and PNS Tabuk, were also built by Damen Shipyards at its Galati facility.

The Yarmook class displaces about 2,300 tonne with an overall length of 91 m, an overall beam of 14 m, and a hull draught of 4 m. It can accommodate a crew complement of 138 and a medium helicopter on its flight deck.

In response to queries from Janes, a Damen representative has confirmed that the follow-on vessels to the Yarmook class have larger dimensions given its overall length of 98 m, a beam of 14.4 m, and a design draught of 4 m.

It will displace approximately 2,600 tonne and can accommodate a crew complement of 60, with additional spaces for 36 personnel.

The vessel will have a standard range of about 6,000 n miles at a cruising speed of 12 kt.

Netherlands-based shipbuilder Damen has disclosed further details of the vessels it is building for ...