The US Army is launching its first Robotic Combat Vehicle (RCV) soldier operational experiment at Fort Carson, Colorado, this month after delaying the assessment in March-April owing to the ongoing coronavirus pandemic.

Colonel Warren Sponsler, chief of staff for the army’s Next Generation Combat Vehicle Cross Functional Team (NGCV CFT), recently spoke with Janes about plans to begin a multiweek RCV experiment on 7 July. During the platoon-sized exercise, the army will use two manned Bradley-based control vehicles to manoeuvre four RCV surrogates that are based on the M113 armoured personnel carrier chassis.

As of early July, these vehicles were at Fort Carson for a series of prechecks and maintenance, Col Sponsler said during a 2 July interview. Once the service is ready to move forward, the exercise will revolve around reconnaissance and security tasks, and is designed to help the service better gauge how a future RCV-Light (RCV-L) fleet could fit inside the force structure.

“[Soldiers are] going to go through two weeks of training and equipment familiarisation, and then we’re going to execute a live-fire portion giving us an opportunity to evaluate the capabilities of the system to engage targets from remote locations,” Col Sponsler explained.

The control vehicles will conduct automotive tasks while the RCV surrogates, outfitted with Common Remotely Operated Weapon Stations (CROWSs), manoeuvre on to the live-fire range. He noted that the army wants to measure the unit’s “effectiveness” in using RCV surrogates to engage targets in a relevant environment. 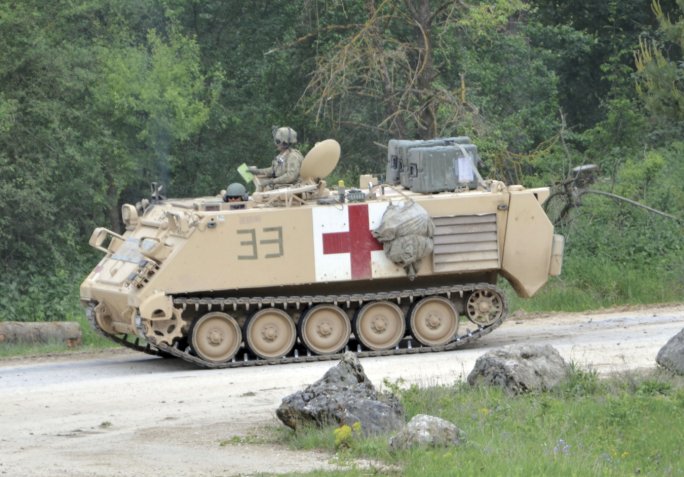 The US Army has based its RCV surrogates on the M113 armoured personnel carrier chassis. The service is set to begin a RCV soldier operational experiment at Fort Carson, Colorado, in July. (Janes/Patrick Allen)