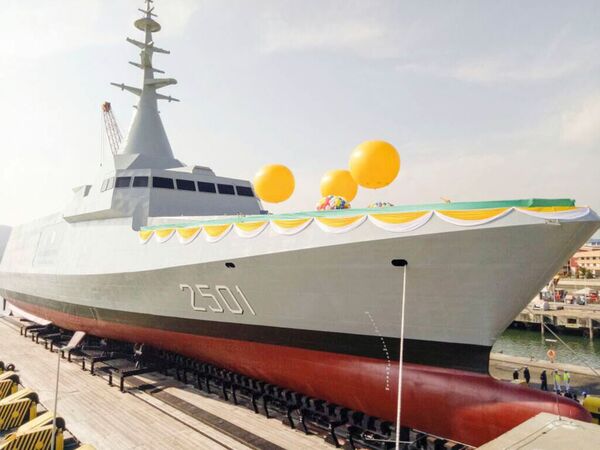 The Royal Malaysian Navy's first-of-class littoral combat ship Maharaja Lela seen here at its launching ceremony in 2017. A parliamentary committee investigation that concluded in 2022 indicates that the vessel has yet to enter the water. (Royal Malaysian Navy)

Several weapons and combat systems on Malaysia's Maharaja Lela-class littoral combat ship (LCS) programme were selected to reflect recommendations made by the programme's main contractor despite objections from the Royal Malaysian Navy (RMN).

This was among several revelations made in a declassified report that was released on the Malaysian government's Public Accounts Committee (PAC) website on 17 August. The report was released as part of a bipartisan parliamentary enquiry into the six-ship programme, which is facing massive delays and cost overruns.

The Malaysian government signed a MYR9 billion (USD2 billion) contract for six vessels with the programme's main contractor Boustead Naval Shipyard (BNS) in 2014. The contract was awarded via a direct negotiation method instead of through an open tender, and the Malaysian government has thus far paid BNS about MYR6 billion. A design based on Naval Group's (then DCNS) Gowind 2500 was selected for the project.

The programme's first-of-class, which will be in service as KD Maharaja Lela once it is commissioned, was ceremonially launched in August 2017. It was supposed to have been delivered to the RMN in April 2019, with the final ship scheduled for handover in June 2023. However, the first vessel is about 60% complete, while work on the final ship has yet to begin. The remaining ships are in various stages of completion at between 16% and 44%.