CMV-22B comes on board CVN for the first time

The US Navy (USN) has completed the first carrier landings and take-offs of its new CMV-22B Carrier Onboard Delivery (COD) variant of the Bell-Boeing Osprey tilt-rotor. 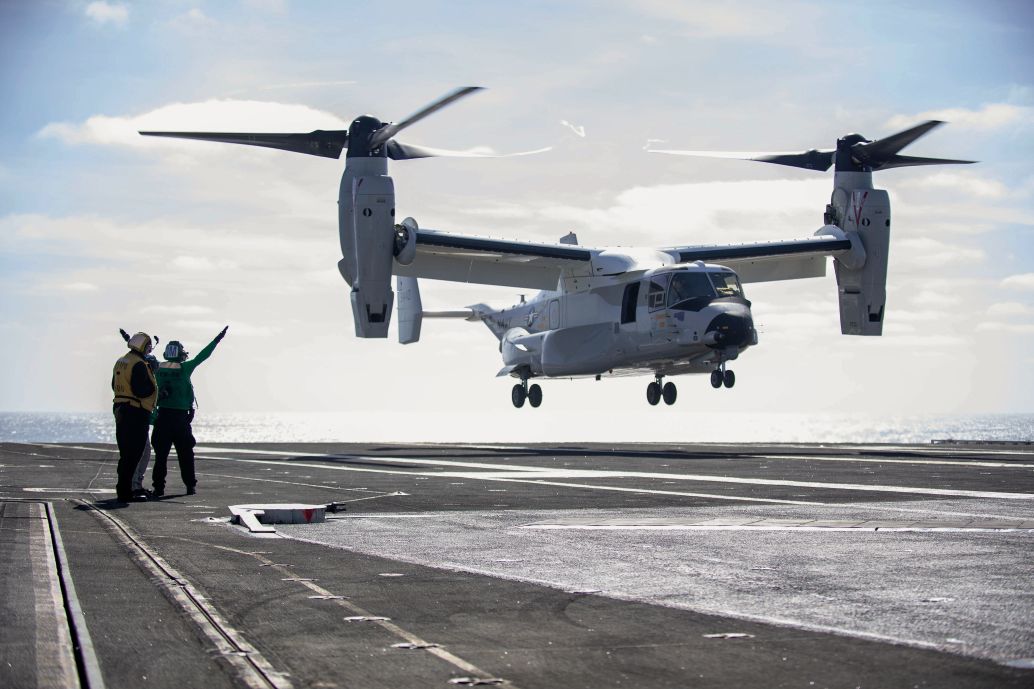 A CMV-22B from Fleet Logistics Multi-Mission Squadron (VRM) 30 recovered to the flight deck of the Nimitz-class nuclear-powered aircraft carrier USS Carl Vinson (CVN 70) for the first time on 20 November. Carl Vinson was underway in the Pacific at the time.

A second CMV-22B operated onto Carl Vinson on 21 November. This aircraft became the first of its type to be refuelled on board a carrier.

The CMV-22B is being procured to replace the C-2A Greyhound in the COD role. The acquisition approach is based on the re-use of the MV-22B Block C air vehicle modified to integrate a series of navy-specific subsystems/requirements: an extended-range capability with aft/forward external conformal fuel tanks in wings and sponsons; a public address system for use while transporting passengers; fuel jettison capability; cargo bay and loading ramp lighting; and secure beyond-line-of-sight communications with an HF radio.

The main driver for the CMV-22B is to transport the Pratt & Whitney F135 engine – the powerplant for the US Marines Corps’ F-35B and the USN’s F-35C variants – direct from shore bases to carrier decks. Being able to put the F135 power module inside the tiltrotor is significant because the capability to transport the load internally extends the range out to 1,000 n miles. In addition, the CMV-22B will allow for direct delivery to amphibious ships as well as carriers.

The US Navy (USN) has completed the first carrier landings and take-offs of its new CMV-22B Carrier ...

The US Navy (USN) is planning to introduce an electronic intelligence (ELINT) system onto the Northr...