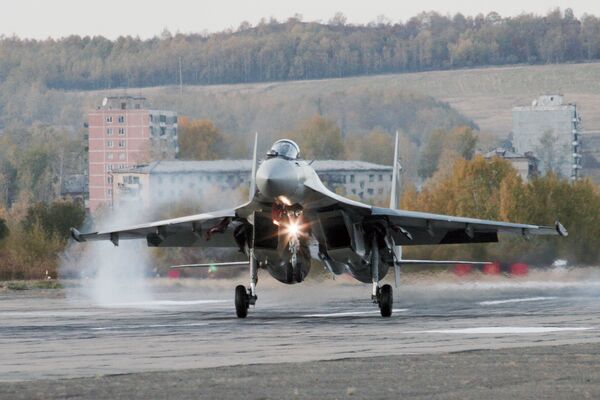 The appearance of a pair of Sukhoi Su-35S in Taiwan's ADIZ on 30 May 2022 suggests that China is trying to increase the complexity of its training flights in an operational environment. Pictured above is a Russian Su-35S fighter taking off during tests in Russia. (Sukhoi)

According to information from Taiwan's Ministry of National Defense (MND), the incursion of two Su-35s was recorded on 30 May and appears linked to a formation of PLA fighter aircraft, which sortied into the southwestern part of the ADIZ.

The two Su-35s appeared to be part of a mixed force of six Shenyang Aircraft Corporation (SAC) J-16s, eight J-11s and four Chengdu Aircraft Industry Group (CAIG) J-10s. Janes analysis has determined that this flight of fighters penetrated approximately 25 n miles into the ADIZ before turning back.

Taiwan started publishing details about Chinese military flights into its ADIZ from 9 September 2020 as a response to rising PLA incursions into the zone. A total of 30 aircraft incursions into the ADIZ were recorded on 30 May. This is the largest single-day number since 4 October 2021. The flights coincided with a three-day visit from 30 May by US Senator Tammy Duckworth to Taipei to discuss regional security and trade with Taiwanese President Tsai Ing-wen.

Malcolm Davis, a senior analyst at the Australian Strategic Policy Institute (ASPI) and an expert on Chinese military modernisation said that the limited penetration was likely intended to trigger a scramble of fighter aircraft by the Republic of China Air Force (RoCAF).