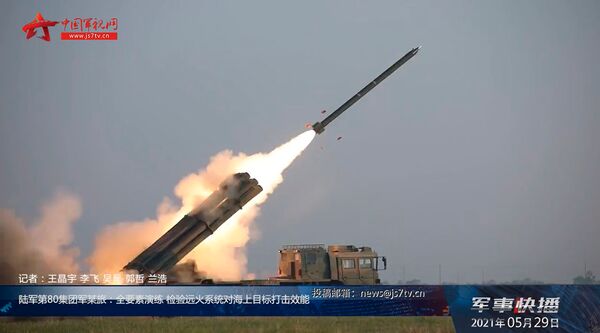 A screengrab from footage provided by CCTV on 29 May showing a PHL-03 MRL at Bohai Bay launching a rocket at a simulated target at sea. (CCTV)

CCTV quoted Captain Li Yu, a company commander at the brigade, as saying that “the troops tested multiple tactics and conducted combined strikes on targets, as the exercise further validated these methods and showed long-range multiple rockets are highly deadly against maritime targets”, according to the state-owned Global Times newspaper.

The exercise followed a CCTV report in October 2020 stating that the PLAGF's Tibet Military Command had begun deploying what it claimed to be a new, longer-range, guided rocket with the PHL-03 MRL that achieves greater accuracy.

The new rocket, the range of which CCTV claimed is 30 km greater than that of the standard rockets used by the system, was shown by the broadcaster being launched by an artillery brigade during a high-altitude, live-fire exercise and accurately striking several small targets in quick succession.