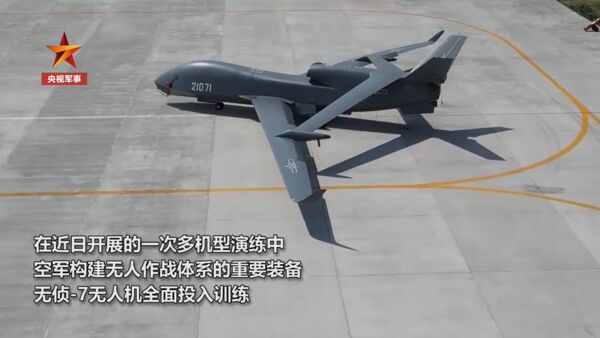 A screengrab from video footage released by CCTV on 10 November showing a WZ-7 HALE UAV in PLAAF service bearing serial number ‘20171', indicating that the platform is operated by the service's 16th Special Mission Air Division. (CCTV)

These numbers adhere to the format ‘21x7x', which is used for aerial assets operated by the 16th Special Mission Air Division, which is under the PLA's Northern Theatre Command. That said, it is unclear where the footage was taken.

The WZ-7, which has been in PLAAF service since at least 2018, had previously been seen deployed to several other air bases, including Dingxin, Malan, Wuwei, Suixi, Lingshui, Shigatse, and Yishuntun, the latter of which is north of Shuangliao in China's Jilin Province near North Korea and is probably the type's main operating base.