Star UAV System, a Chengdu-based developer of unmanned aerial vehicles (UAVs), has begun production and initial deliveries of its AT200 cargo UAV following a series of successful airworthiness trials in 2018, Jane’s has learnt.

Under a contract awarded by launch customer SF Express in October 2017, Star UAV will supply three AT200 air vehicles for further evaluation and operational testing. The company will partner with SF Express – China’s second largest domestic and international courier based in the Guangdong province – to validate air traffic control, autonomous flight and navigation technologies, and safety procedures that are necessary to enable large-scale unmanned air logistics operations within the country. 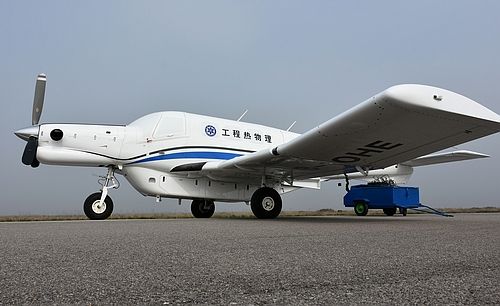 China’s Star UAV has begun first deliveries of its AT200 cargo UAV and could manufacture as many as 50 of these air vehicles by 2022. (Chinese Academy of Sciences)

The company has also signed a contract to deliver up to 50 air vehicles to an undisclosed customer by 2022.

A Star UAV spokesperson told Jane’s that a prototype AT200 successfully performed a pre-programmed flight between Pucheng Neifu Airport and Danfeng Airport in Shaanxi province on 26 October 2018, flying at altitudes of up to 16,732 ft (5,100 m) over the Qinling Mountains, with the air vehicle taxiing and taking off automatically during the launch process.

The air vehicle also performed an automatic landing and taxi to its allocated berth, before being inspected by engineers from Star UAV and the co-developer Chinese Academy of Sciences (CAS). It returned to Pucheng Neifu Airport via an alternate route, again automatically performing launch and recovery manoeuvres. According to the spokesperson, the flight trial lasted for approximately 194 minutes.