Video footage released by China Central Television (CCTV) appears to show that the carrier rocket used in the firings was a Dong Feng 15 (DF-15; also known as a CSS-6 by the US Department of Defense), with the media outlet indicating that it was fitted with a new or modified warhead. 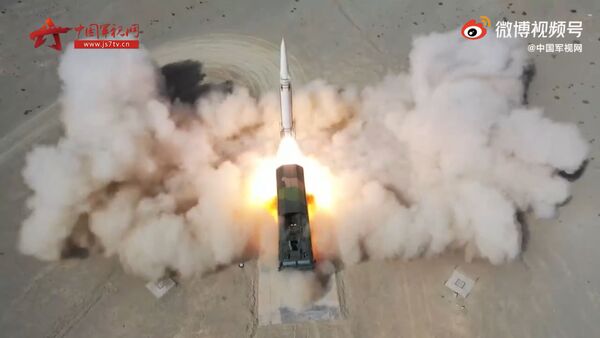 A screengrab from footage released by CCTV on 21 August showing what the media outlet described as one of two new conventionally armed ballistic missiles being launched by a PLARF brigade from a TEL vehicle located at a desert region in northwestern China. (CCTV)

The missiles were launched from a desert location in northwestern China and flew for “hundreds of kilometres”, noted CCTV, adding that the weapons were operated by troops from the PLARF's 1st Conventional Missile Brigade and transported to the launch site on four-axle, wheeled transporter-erector-launchers (TELs).

Assessments of the DF-15's range in part depend upon the mass of the warhead carried, but may be in excess of 800 km. The CCTV report highlighted reductions in the time taken to prepare the new missiles for launch and the need for fewer personnel due to improved automation.

Images of the missile being launched show a warhead fitted with control fins to provide adjustments to the ballistic trajectory in the terminal phase. This is similar to the DF-15B, which Janes Strategic Weapons assesses to be equipped with GNSS guidance, a laser rangefinder, and an active radar seeker.