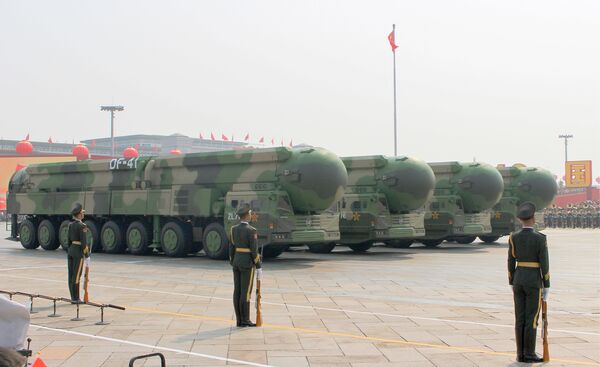 Several road-mobile DF-41 ICBM systems on display during a military parade held at Tiananmen Square in Beijing on 1 October 2019. According to the Pentagon's ‘2021 China Military Report', Beijing is rapidly increasing its nuclear arsenal and also considering additional launch options for the DF-41, including silos. (Zoya Rusinova/TASS via Getty Images)

China is expanding its nuclear weapon capabilities much faster than US officials had predicted a year ago, the US Department of Defense (DoD) said in its 2021 report on military and security developments involving the East Asian country.

The “accelerating pace” of the People's Liberation Army's (PLA's) nuclear expansion “may enable the PRC [People's Republic of China] to have up to 700 deliverable nuclear warheads by 2027. The PRC likely intends to have at least 1,000 warheads by 2030, exceeding the pace and size the [US] DoD projected in 2020,” noted the authors of the ‘2021 China Military Power Report' report, which was released on 3 November.

In the 2020 edition of the report Pentagon officials had estimated that the number of China's nuclear warheads was “in the low-200s” but was projected “to at least double in size” over the next decade as part of efforts to modernise the PLA.

The authors of latest report noted that Beijing is boosting the country's capacity to produce and separate plutonium by constructing fast breeder reactors and reprocessing facilities. Although this is consistent with the China's goal of closing the nuclear fuel cycle, Beijing “likely intends to use some of this infrastructure to produce plutonium for its expanding nuclear weapons programme”, stated the Pentagon.

China is expanding its nuclear weapon capabilities much faster than US officials had predicted a yea...