China has cleared for export a variant of the HQ-17A road-mobile, short-range air-defence (SHORAD) system known as the HQ-17AE, according to a 7 March report by the state-owned Global Times newspaper.

As with other members of the HQ-17 family, the 6×6 HQ-17AE, which was developed by the Second Academy of the state-owned China Aerospace Science and Industry Corporation (CASIC), is intended to provide air defence against precision-guided munitions – such as cruise missiles, guided bombs, and air-to-surface missiles – as well as against the more traditional SHORAD target set of aircraft, helicopters, and unmanned aerial vehicles (UAVs). 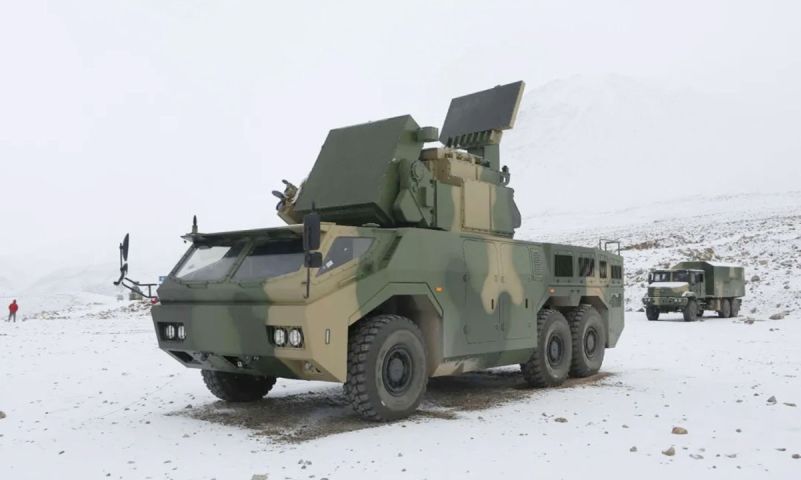 China has cleared the HQ-17AE self-propelled SHORAD system (foreground) for export, according to a 7 March report by the state-owned Global Times newspaper. (CASIC via Global Times)

The HQ-17 family, which is a Chinese derivative of the Russian-made Tor family of SHORAD systems, is known to comprise at least three versions: the HQ-17 tracked and HQ-17A wheeled variants operated by the People’s Liberation Army Ground Force (PLAGF), and the FM-2000 wheeled export variant, which was first displayed at the 2018 Airshow China defence exhibition in Zhuhai.

It is unclear whether the HQ-17AE is just a new designation for the FM-2000, or whether it is a distinct variant that uses a transporter, launcher, and radar (TLAR) vehicle more closely based on the HQ-17A TLAR design.

The difference between the HQ-17A and the FM-2000 TLARs is minor, as both systems use the same turret, but their base platform hull is different. Footage released by China Central Television (CCTV) and images provided by Global Times

China has cleared for export a variant of the HQ-17A road-mobile, short-range air-defence (SHORAD) s...