Italian shipbuilder Cantiere Navale Vittoria is set to cut first steel for a new offshore patrol vessel (OPV) for the Armed Forces of Malta (AFM) in the first quarter of 2019.

The new ship, to be known as P71, will be built under a EUR48.6 million (USD56.2 million) contract awarded to Cantiere Navale Vittoria in October 2018. The ship’s design is being supplied by Spanish company Cintranaval-Defcar. 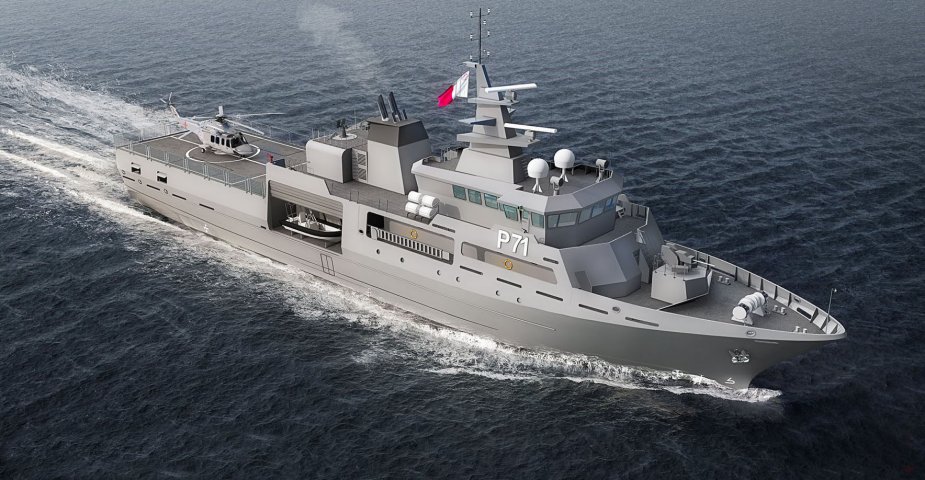 The new 1,800 tonne OPV will provide a significant uplift in capability for the AFM. (Cantiere Navale Vittoria )

Work will be carried out at Cantiere Navale Vittoria’s facilities near Adria (Rovigo) in northeast Italy, with the ship planned to be delivered in the second half of 2020. The contract includes an integrated logistic support package and training for the OPV crew and shore-based support staff, together with an option for a second ship.

Ship particulars released at an official contract signing ceremony held by the AFM on 16 January include a full-load displacement of 1,800 tonnes, an overall length of 74.8 m, a beam of 13 m, and a draught of 3.8 m. The ship will carry a crew of about 50, with accommodation for an additional 20 personnel.

P71 will have a 360°-view main bridge, protected sidewalks on the main deck, and a large flight deck aft. The aviation facility will provide for the operation and refuelling of an AW139 helicopter (in service with the AFM) but no hangar will be fitted.