The UK Royal Navy (RN) has completed a series of live firing trials of the new Martlet lightweight precision strike missile from a Wildcat HMA2 helicopter.

Undertaken at the UK Ministry of Defence (MoD) Aberporth Range on the west coast of Wales, the firings – which were conducted as part of the UK’s Future Anti-Surface Guided Weapon (FASGW) programme – demonstrated the integration of the Martlet system onto the Wildcat platform ahead of service entry. The system is due to enter service with the RN in January 2021, according to the Defence Equipment Plan 2019 financial summary released in February 2020. 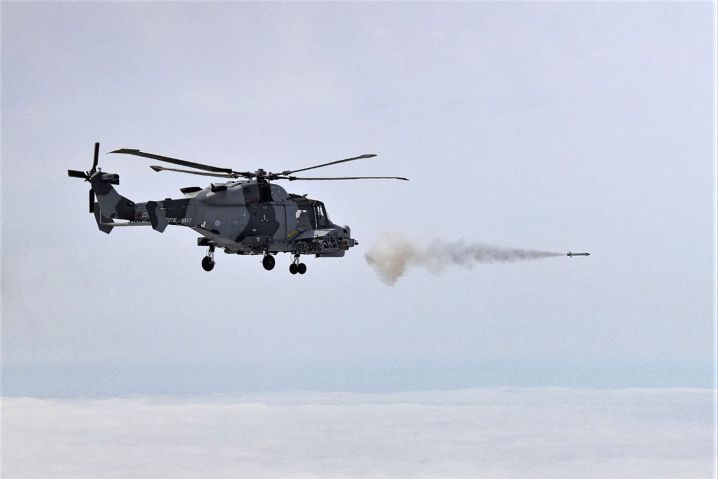 The UK Royal Navy completed a series of live firing trials of the new Martlet lightweight precision strike missile from a Wildcat HMA2 instrumented trials airframe at the Aberporth Range between 27 April and 21 May.

Designed to meet the FASGW(Light) requirement, Martlet is an anti-surface warfare exploitation of the Thales Lightweight Multirole Missile (LMM). Building on the pedigree of the Starstreak high-velocity missile, LMM is a lightweight (13 kg) low-cost precision strike missile using laser beam riding guidance to provide a capability against a set of air, land, and sea targets at ranges between 400 m and 6 km.

As one strand of the twin-track FASGW programme, FASGW(Light) is designed to confer a robust and proportionate capability against fast inshore attack craft (FIAC), waterborne improvised explosive devices, rigid inflatables, and jet-skis. The larger FASGW(Heavy) will provide a complementary capability against larger vessels up to corvette size; MBDA’s Sea Venom/Anti-Navire Leger (ANL) missile has been selected to meet this requirement.

The UK Royal Navy (RN) has completed a series of live firing trials of the new Martlet lightweight p...

MBDA in the United Kingdom, in collaboration with its partners in Team Tempest, has unveiled a range...