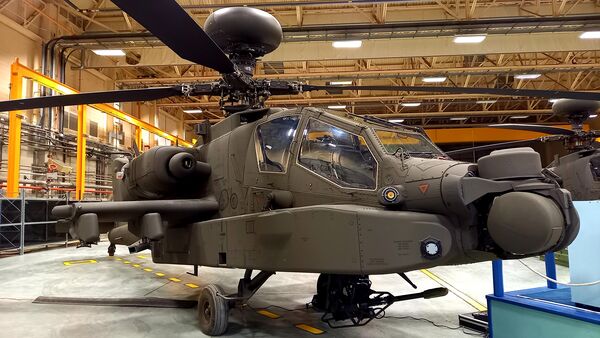 The British Army has so far received 14 of 50 Boeing AH-64E Apache Guardian attack helicopters. Deliveries will continue till 2024. (Janes/Gareth Jennings)

The British Army showcased its latest Boeing AH-64E Apache Guardian attack helicopter to the media during an event at the type's main operating base at Wattisham Airfield on 20 January.

At the event, which was attended by Minister of State for Defence Procurement Jeremy Quin and top-level military officials, air and ground crew presented the AH-64E that is being introduced into service with the Army Air Corps (AAC).

“Sometimes, in the long slog of defence procurement, there are exciting punctuation marks where stuff arrives,” Quin said.“There can be no doubt these impressive Apache helicopters will help the army sustain its battle-winning capabilities in future operations,” he added.

The AAC is in the process of receiving 50 AH-64Es that are being remanufactured from the WAH-64D Apache Longbow AH1 helicopters by Boeing in the US. Although the precise nature of the remanufacturing process has not been disclosed, it involves a number of the existing systems being cross-decked from the old WAH-64D over to the new AH-64E airframes.

Speaking at the event in Wattisham, Major James Cambrook, Staff Officer (SO) 2 Capability Development for Apache, told Janes and other defence media that the AH-64E represents a step change in capability over the WAH-64D in the three key areas of speed, lethality, and reach.