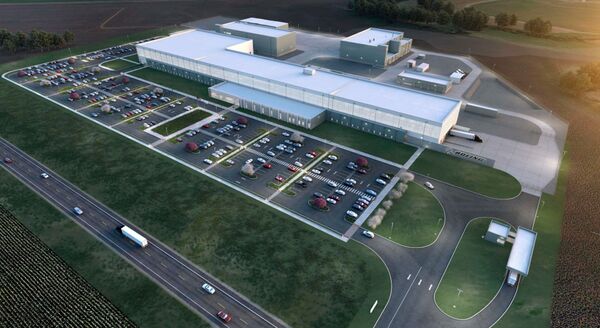 An artist's impression of how the new Stingray production facility in Illinois will look after completion in 2024. (Boeing)

Boeing is to build a bespoke production facility for the MQ-25A Stingray uncrewed tanker at MidAmerica St. Louis Airport in Illinois, the company announced on 17 September.

The new plant will be located approximately 50 km southeast of Boeing Defense, Space and Security's primary facility in St Louis, Missouri, and will measure nearly 30,000 m 2 . Work will be complete in 2024.

Boeing is currently producing the first seven MQ-25 aircraft, as well as two ground test articles, at its St Louis facilities, which will be transported to MidAmerica for flight testing. The MQ-25 programme office, including its core engineering team, will remain in St Louis, the company said.

The Boeing-owned T1 test asset currently performing flight and tanker trials is due to be shipped to Norfolk, Virginia, for deck handling trials aboard a US Navy aircraft carrier later this year.

Boeing is to build a bespoke production facility for the MQ-25A Stingray uncrewed tanker at MidAmeri...