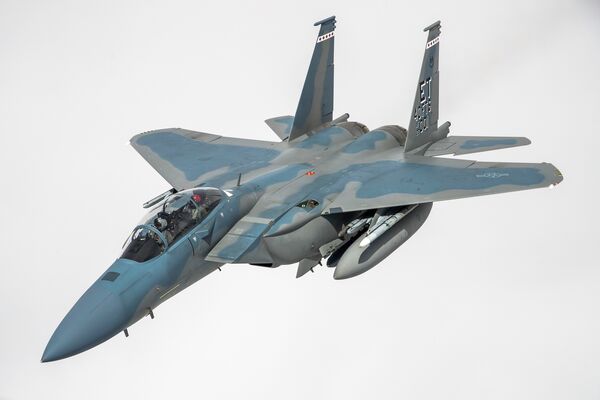 Boeing has confirmed that Dynamatic Technologies is the first Indian supplier on its programme to build F-15EX Eagle II fighter aircraft (pictured) for the US Air Force. (USAF photo by Ethan Wagner)

Dynamatic Technologies has become the first Indian firm to participate in the production of Boeing's newest tactical fighter, the F-15EX Eagle II.

Boeing told Janes on 21 September that the Bangalore-headquartered firm will produce and supply aerostructure assemblies for the F-15EX, which has been ordered by the US Air Force (USAF).

The deal marks an expansion of Dynamatic Technologies' 10-year-plus partnership with Boeing and the US corporation's deepening engagement with Indian industry.

Boeing told Janes that it sources about USD1 billion worth of supplies from India's commercial and defence aerospace industry sectors. This sourcing has grown from USD225 million in 2014 when New Delhi launched its ‘Make in India' campaign.

Pointing to its commitment to this initiative, Boeing said its Indian supplier base has grown from approximately 160 firms in 2017, to 200 in 2020, and to 275 in 2021. About 26% of its suppliers this year are designated as micro, small, and medium enterprises.

Growth is also evident in employee numbers. Boeing employs 3,000 people in India, and more than 7,000 people work with its supply chain partners, it said.

Boeing's expanded ties with Indian suppliers in the past two years are notable, given obstacles related to the Covid-19 pandemic. A spokesperson for the corporation said the pandemic prompted an emphasis on ensuring safety.

“At Boeing in India, our focus has been to build safety standards into all dimensions of our operations and supply chains, and to partner closely with our customers, suppliers, and employees,” the spokesperson said.