Boeing has begun the second phase of flight trials of the T-7A Red Hawk advanced jet trainer aircraft it has co-developed with Saab for the US Air Force (USAF). 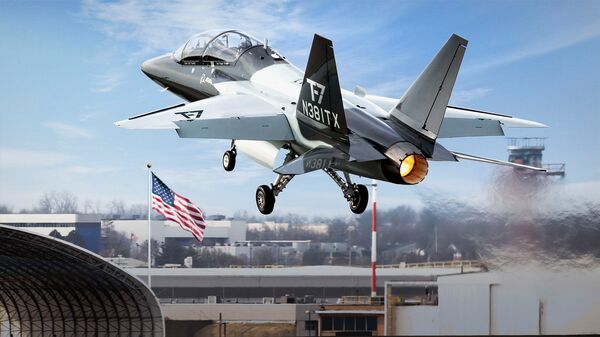 One of the two production-representative jets so far built and flying departs St Louis of a test sortie. Boeing has now begun the second phase of flight trials of the T-7A Red Hawk trainer aircraft. (Boeing)

The prime contractor announced on 22 June that Phase 2 flight testing had begun with three sorties being flown on the same day out of its St Louis production facility in Missouri.

As noted by Boeing, this new phase will see the aircraft's “fighter-like performance and digital capabilities” evaluated for future USAF fighter and bomber pilots.

Boeing is in the engineering and manufacturing development (EMD) phase of its T-X Advanced Pilot Training Program (ATP) contract with the USAF to build 351 Red Hawk aircraft to replace the service's ageing Northrop T-38 Talon. To date, two production-representative jets (PRJs) have been built and flown, while EMD will see a further five aircraft added to the test fleet.

With Saab having delivered its first aft-fuselage to St Louis in April, Boeing told Janes that the first EMD flight was slated for September. However, it emerged earlier in June that a 'wing rock' problem, whereby the aircraft was experiencing some wing stall during high angle-of-attack manoeuvres, had been discovered during flight trials. It is not known to what degree, if any, this will delay the first EMD flight, although the USAF has said that it will put back the Milestone C full-rate production delay by about four months, with that event now set to happen in October or November 2022.