Bell urges UK to wait for ‘next-generation' 525 for NMH 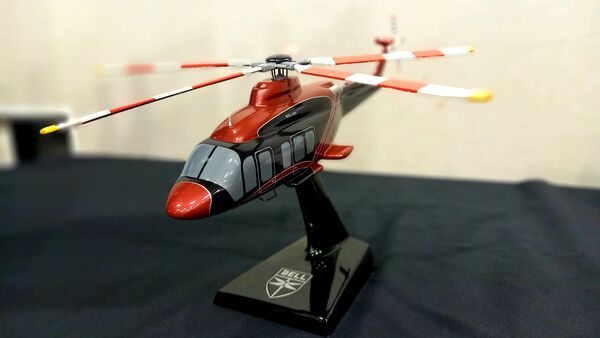 A model of the 525 Relentless displayed at the IQPC International Military Helicopter conference in London. Bell is to pitch the platform for the UK's New Medium Helicopter requirement. (Janes/Gareth Jennings)

The UK Ministry of Defence (MoD) should wait for the Bell 525 Relentless so as to field “a next-generation rotorcraft capability” for its New Medium Helicopter (NMH) requirement, Joel Best, director of EUMECAA global military sales and strategy, told Janes on 16 February.

Speaking at the IQPC International Military Helicopter conference being held in London from 15–17 February, Best said that Bell absolutely intends to bid its 525 for the UK NMH requirement, and with its current certification process with the US Federal Aviation Administration (FAA) on track to conclude in the fourth quarter of 2022 (subject to all FAA submittals and approvals being returned in a ‘reasonable' timeframe), the MoD would not need to delay for long.

“We understand that the UK would be reluctant to be the first to adopt a new platform, but we have designed the 525 with a digital thread running through it and we will be ready to hit the ground running once certification is completed later this year. We really want to be a part of this [NMH] competition, and as the UK has already delayed its medium-lift helicopter requirement a number of times, if they just wait a little longer for us to join, they won't miss out on a next-generation rotorcraft capability,” Best said.

Best's comments mark the first time that Bell has confirmed the 525 as its intended offering for the NMH requirement. The UK is planning to replace its Airbus Helicopters Puma HC2, Bell 212, Bell 412, and Dauphin rotorcraft with between

The UK Ministry of Defence (MoD) should wait for the Bell 525 Relentless so as to field “a next-gene...