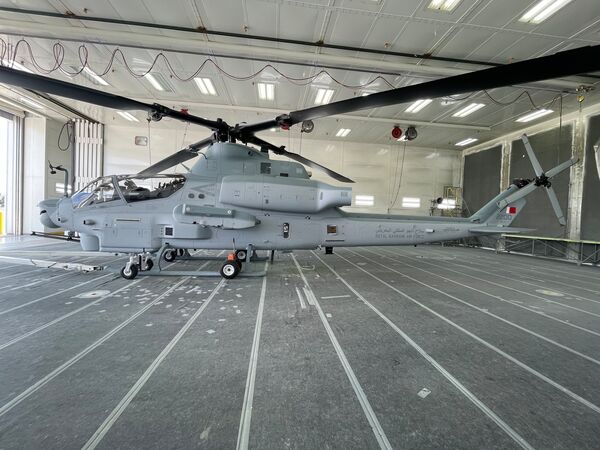 With the roll-out of the first AH-1Z for Bahrain, it was revealed that the kingdom's fleet will feature a ‘unique' two-tone grey colour scheme. (Bell)

Bell has rolled out the first of 12 AH-1Z Viper for Bahrain, handing the attack helicopter over to the US Naval Air Systems Command ahead of delivery to the Gulf kingdom in 2022.

The manufacturer announced the milestone on 22 October, releasing an image of this first helicopter finished in the ‘unique' two-tone grey scheme and markings of the Royal Bahraini Air Force (RBAF). News of the roll-out came approximately seven months after the work on the first helicopter began at Bell's Amarillo production facility in Texas in March.

Bahrain is to receive its AH-1Z attack helicopters under a Foreign Military Sales deal that was first approved in April 2018 and signed in February 2019. As noted by the US Defense Security and Cooperation Agency (DSCA) when the procurement was first approved, in addition to the 12 AH-1Z helicopters, Bahrain is to also acquire Lockheed Martin AGM-114 Hellfire air-to-surface missiles and BAE Systems Advance Precision Kill Weapon System II guided rockets, as well as Thales TopOwl helmet-mounted display system.

The total value of the deal that includes spares, support, and ancillary equipment, was estimated by the DSCA to be USD911.4 million. The RBAF helicopters are being built under the US military's Lot 16 production run.

With the AH-1Z designed for the US Marine Corps, Bahrain is the second export customer after Pakistan (while Pakistan was supposed to have begun receiving its aircraft, they are in storage in the US following a diplomatic dispute between the governments of both countries). The Czech Republic has since signed for the helicopter also.

Bell has rolled out the first of 12 AH-1Z Viper for Bahrain, handing the attack helicopter over to t...