Belarus is modernising its 9A33BM2 and 9A33BM3 vehicles, from the 9K33 Osa (SA-8 Gecko) air-defence system, to the 9A33-2B standard, according to the State Military Industrial Committee (Goskomvoenprom).

The work is being done by the 2566 Radioelectronic Armament Repair Plant, which is a part of the Goskomvoenprom system.

The new 9A33-2B transport-erector-launcher, based on a newer MAZ-6317 chassis, was first presented at the MILEX 2019 arms exhibition in Minsk. 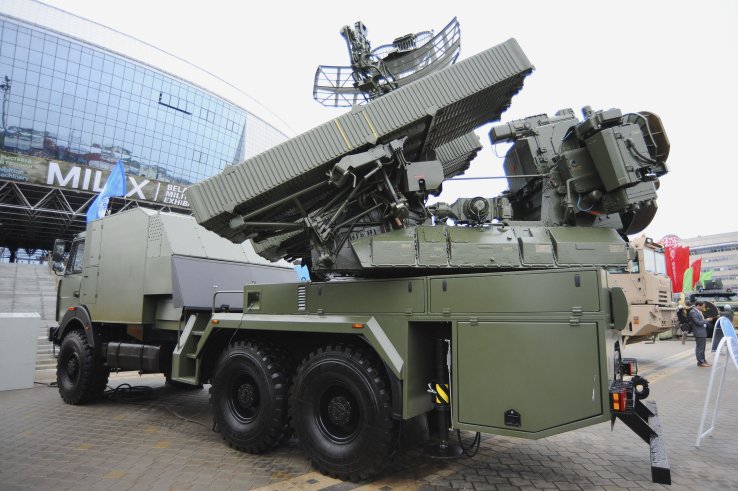 The 9A33-2B vehicle is based on a MAZ-6317 chassis for the modernised Osa air-defence system. (State Military Industrial Committee of the Republic of Belarus)

Work to transfer the Osa system from its earlier BAZ-5937 chassis to MAZ-6317 chassis began in 2017. The system’s 9A33-1B variant was based on the BAZ-5937 chassis, but Russia’s Bryansk Automobile Plant discontinued that chassis and its spare parts, so the Osa system was developed on the MAZ-6317 family manufactured by the Minsk Automobile Plant, Goskomvoenprom said.

The air-defence commander’s workstation is also included in the combat vehicle. The vehicle’s detection and tracking stations and optical sight have also been modernised to better detect, track, and engage small targets such as unmanned aerial vehicles (UAVs), Goskomvoenprom claimed. A company spokesperson said that during tests, the target and guidance systems were able to detect Berkut type UAVs at a range of 13.8 km. Testing also included detection and tracking of a MiG-29 fighter aircraft at a range of about 42 km and an Mi-8 helicopter, Goskomvoenprom said.