The Bundeswehr’s Panzergrenadierbrigade (Armoured Infantry Brigade) 37 is preparing to lead the NATO Response Force (NRF) Very High Readiness Joint Task Force (VJTF) in 2023, its commander said in an interview on the Germany Army’s website on 28 May. The brigade’s vehicles are being equipped with a new battle management system (BMS), Brigadier General Gunnar Brügner recalled. 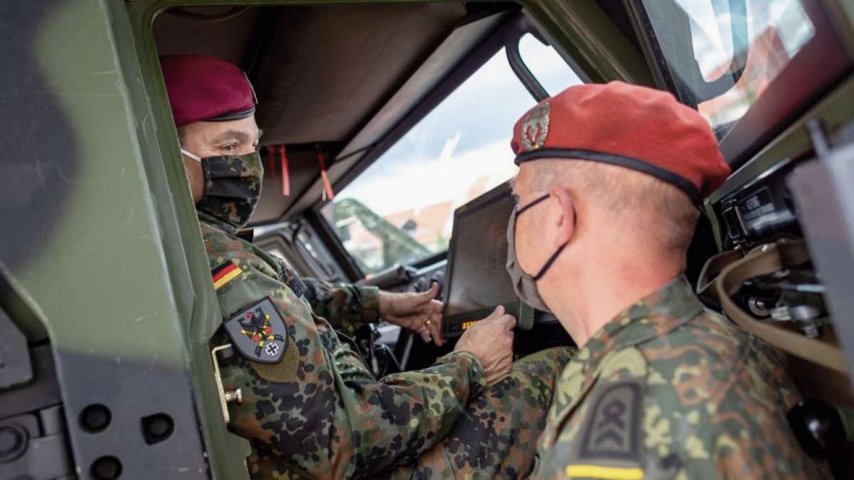 German Army chief Lieutenant General Alfons Mais (left) inspects the service’s new BMS in an Eagle command vehicle during the introduction of the system in Frankenberg.

He reported that Panzerpionierbataillon (Armoured Engineer Battalion) 701, based in Gera, eastern Germany, is the first unit in his brigade to install the BMS. He said the process is being supported by the Nuclear, Biological and Chemical Defence (NBC) Command of the Bundeswehr’s Streitkräftebasis (SKB) support command, ABC-Abwehrbataillon (NBC Battalion) 750 of which has first experiences installing the BMS, and by its Cyber and Information Domain, which “supported us in initiating the first procedures in the command post”.

Understanding what needs to be done allows the BMS to be installed relatively quickly, according to Brig Gen Brügner, who added, “It depends on the vehicle. It is quick with the Fennek reconnaissance vehicle and Leopard main battle tank; with other vehicles a system alignment must be carried out. But the first steps have been made.” SKB project officer Lieutenant Colonel Bodo Bock said it takes an average of 2 hours to install the BMS into a vehicle, which can be done by non-specialised personnel without supervision.

The Bundeswehr’s Panzergrenadierbrigade (Armoured Infantry Brigade) 37 is preparing to lead the NATO...