The systems, which are based on a 6×6 Kamaz truck chassis, were formally handed over to the army in a ceremony held on 20 June at the Corps of Military Police Centre & School (CMPC&S) in Savar Cantonment near Dhaka, according to a statement released the same day by Inter-Services Public Relations (ISPR), the media wing of the Bangladeshi military.

Prime Minister Sheikh Hasina, who attended the event via video conference, said that the induction of the Tiger system has added “a new dimension to the capabilities of the Bangladesh Army”. 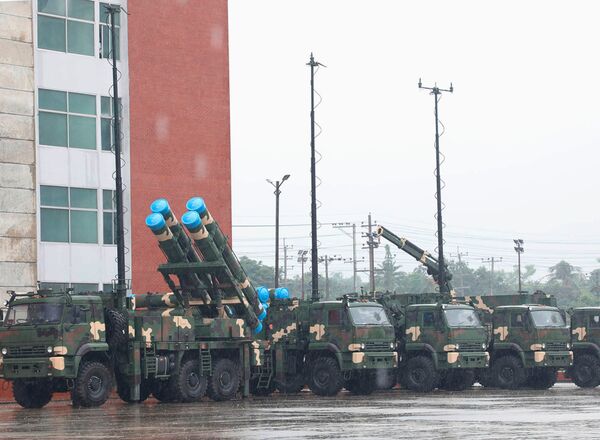 The Bangladesh Army inducted an undisclosed number of Tiger T-300 MRLs in a ceremony held on 20 June near Dhaka. (Inter-Services Public Relations)

Hasina went on to say that the modernisation of the service will continue under the ‘Forces Goal 2030' initiative, which outlines a range of major acquisitions to modernise the Bangladesh military.

Each launch vehicle in the T-300 system carries four launch tubes, each of which is capable of firing Roketsan TR-300-series projectiles, including the 4.75 m-long TR-300E unguided rocket, which has a stated range of between 40 km and 100 km.

The system can also fire the TRG-300 Tiger missile, which comes in two variants – Block I and Block II (Enhanced Warhead Dynamic Effectiveness) – with the first one having a range of between 30 km and 120 km and the second one of between 20 km and 90 km.

According to Roketsan, guidance for both TRG-300 variants is provided by GPS and aided by an inertial navigation system. Both missiles feature aerodynamic control with an electromechanical actuation system.

The Bangladesh Army has inducted into service an undisclosed number of Tiger T-300 multiple rocket l...