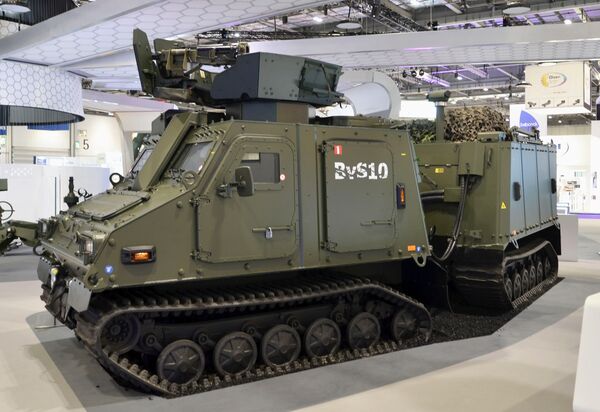 BAE Systems Hägglunds believes the Republic of Korea Armed Forces has a capability gap that the BvS10 can fill. (Janes/Patrick Allen)

BAE Systems Hägglunds believes the Republic of Korea Armed Forces has a capability gap that the company can fill with its BvS10 armoured all-terrain vehicle.

BAE Systems Hägglunds also produces the BvS10 Beowulf, which is a variant equipped with less armour. Darren Restarick, region sales director for BAE Systems Hägglunds and platform manager for BvS10 and Beowulf told Janes that South Korea has not issued a requirement for a programme that may involve the BvS10. However, the company sees an opportunity for the BvS10 with the RoK Armed Forces. The Republic of Korea Army (RoKA) operates the Bv206. “The Bv206 is an ageing product, and with ageing products, support over a long period becomes more difficult with obsolescence,” said Restarick.

“South Korean defence like [in] many other countries has moved predominantly towards wheel-based capabilities. And you can understand that in some contexts. But when you look at some of the terrains in these countries, and when you look contextually at the history of Korea where the vast majority of conflicts have been won in the mountains and the forest areas, it is one area that has a significant capability gap,” he added. Restarick said that small agile tracked vehicles that can navigate high mountainous woody terrain provide the user with an extra capability that surpasses wheeled platforms. He said the BvS10 is not necessarily being offered to replace the Bv206 but to “provide a capability that fills the gap that is there currently”.

BAE Systems Hägglunds believes the Republic of Korea Armed Forces has a capability gap that the comp...