B-2 stealth bombers in extended deployment to Australia 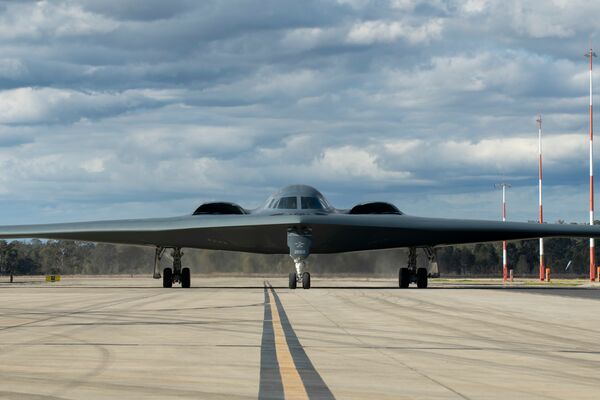 A B-2 Spirit stealth bomber piloted by US Lieutenant Colonel Andrew Kousgaard, commander of 393rd Expeditionary Bomb Squadron, at RAAF Amberley on 12 July. The B-2 will operate in Australia throughout July and August, in what is the first major deployment of the bombers to the country. (US Air Force/Technical Sergeant Dylan Nuckolls)

Two US Air Force (USAF) Northrop Grumman B-2 Spirit stealth bombers will operate in Australia until the end of August.

This is the first deployment of B-2 bombers to Australia as part of the Bomber Task Force (BTF).

The B-2s arrived at Royal Australian Air Force (RAAF) Base Amberley on 10 July to support a BTF deployment, the US Pacific Air Forces (PACAF) said in a statement. The aircraft belong to the US 509th Bomb Wing at Whiteman Air Force Base in Missouri.

The BTF deployments are part of the Enhanced Air Cooperation initiative between the United States and Australia. The Australian Department of Defence (DoD) told Janes that this initiative includes “enhanced air co-operation through the rotational deployment of US aircraft of all types in Australia and appropriate aircraft training and exercises”.

An Australian DoD spokesperson said that the “aircraft will be here throughout the months of July and August and are planning to be involved in various Australian Defence Force (ADF) exercises such as Exercise ‘Koolendong' and Exercise ‘Arnhem Thunder'”.

Several KC-135 stratotanker aircraft from the PACAF are also deployed to RAAF Base Amberley as part of the Enhanced Air Cooperation initiative, the spokesperson added.

Two US Air Force (USAF) Northrop Grumman B-2 Spirit stealth bombers will operate in Australia until ...