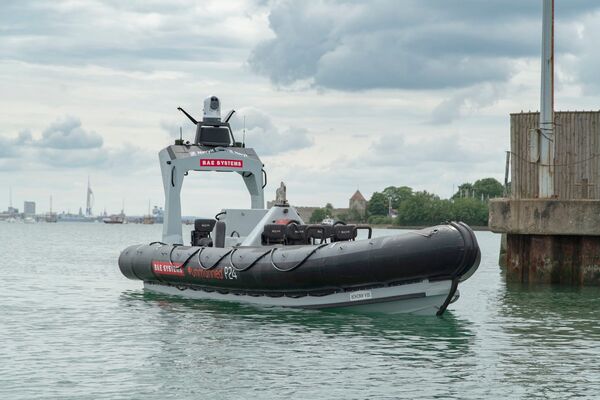 Developed by BAE Systems and operated by the RN's NavyX autonomy and lethality accelerator, the APAC24 is an unmanned surface vehicle (USV) testbed being used to support investigations of how a USV based on a standard sea boat could deliver force protection and intelligence, surveillance, and reconnaissance (ISR) missions. The APAC24 is an adaptation of the standard 7.5 m Pacific 24 Mk 4 sea boat deployed across the RN surface fleet.

According to the RN, it is planned to run trials of the APAC24 from a Batch 1 River-class OPV at an unspecified date in 2022. In support of the trial, the Navy Command Headquarters on 6 October issued an invitation to tender (ITT) for the purchase of a launch and recovery system to be fitted to the host vessel.

According to the ITT, the APAC24 requires manual recovery to the ship using existing davit equipment and therefore requires that personnel transfer between boats. This represents a potentially hazardous activity in a seaway.

Instead, the RN is seeking a system to enable launch and recovery of an unmanned APAC24 to a Batch 1 River-class OPV (either moving or stationary). It has stipulated that there should be no personnel in the boat (although it can operate under remote control rather than fully autonomously) .