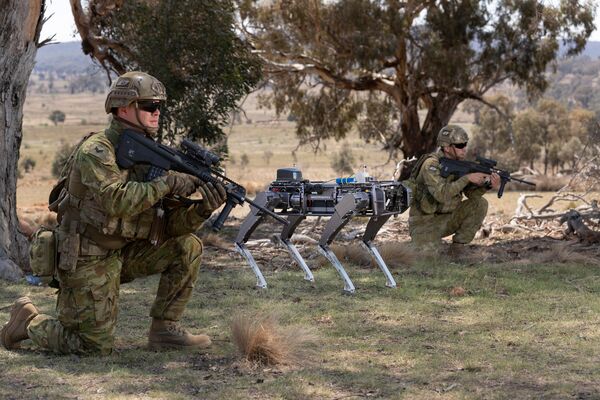 A Ghost Robotics unmanned ground vehicle supports Australian Army soldiers conducting an enemy position clearance during an autonomous systems display at the Majura Training Area, Canberra. The army is promoting the further development of such systems through a new strategy issued in August 2022. (Commonwealth of Australia)

The Australian Army has launched a new strategy to enhance capabilities in robotics and autonomous systems (RAS).

The strategy – issued earlier this month by the Australian Army's Robotic and Autonomous Systems Implementation & Coordination Office (RICO) – said it is intended to enable the army to “gain an operational advantage” in the battlefield.

“The increased use of RAS capabilities will continue to evolve the way the army trains and fights – enabling increased tempo, decision making, and reducing risk,” said Chief of Army Lieutenant General Simon Stuart in the strategy's foreword.

“In turn, this will afford commanders new opportunities in achieving competitive advantage in some of the most dangerous tasks in the future operating environment.”

The strategy said RAS capability will enhance the army's situational awareness, survivability, and lethality through “high-speed information analysis and distribution”.

However, the strategy emphasises that its implementation relies on factors such as proven technologies, innovation and industrial capacity, international partnerships, as well as ethical considerations.

Highlighting potential future capabilities, the strategy said soldier performance could be improved through the development of systems such as a “modular autonomous platform” that would have uses including load carriage, close-fire support, or target acquisition.

The Australian Army has launched a new strategy to enhance capabilities in robotics and autonomous s...