Australia and the United States have signed an agreement to formalise co-operation on precision-strike capability.

The Australian Department of Defence (DoD) said on 12 August that the recently signed memorandum of understanding (MOU) facilitates Australian Army participation in the US Army's Precision Strike Missile (PrSM) system. 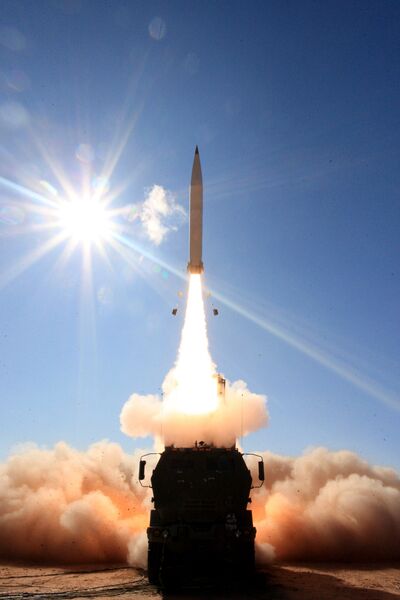 An image of the inaugural flight of Lockheed Martin's PrSM prototype in December 2019. (US Army)

Under the accord, Australia has contributed USD54 million to the PrSM project, with a commitment, said the DoD, to “increase the lethality, range and target engagement of the baseline missile in development”.

Major General Simon Stuart, head of land capability in the Australian Army, said the agreement supports PrSM development under Increment 2 of the programme aimed at incorporating technologies allowing ships and air-defence systems to be engaged with the system.

The US Army said the MOU enables regular technical meetings between the US and Australia on design, development, and testing under PrSM Increment 2 as well as planning for future industrial and technology co-operation between the two countries.

It added that the agreement supports US presence in the Indo-Pacific and provides an opportunity to develop US Army long-range precision fires capability in the region.

The US Army's PrSM project is led by Lockheed Martin. To meet the requirement the company is developing a precision-strike missile, which it says has a range of between 60 km and 499 km.

In flight tests in May 2021, a PrSM prototype flew about 400 km to a target site at White Sands Missile Range, New Mexico. The weapon was launched with a Lockheed Martin M142 High-Mobility Artillery Rocket System (HIMARS).

Australia and the United States have signed an agreement to formalise co-operation on precision-stri...