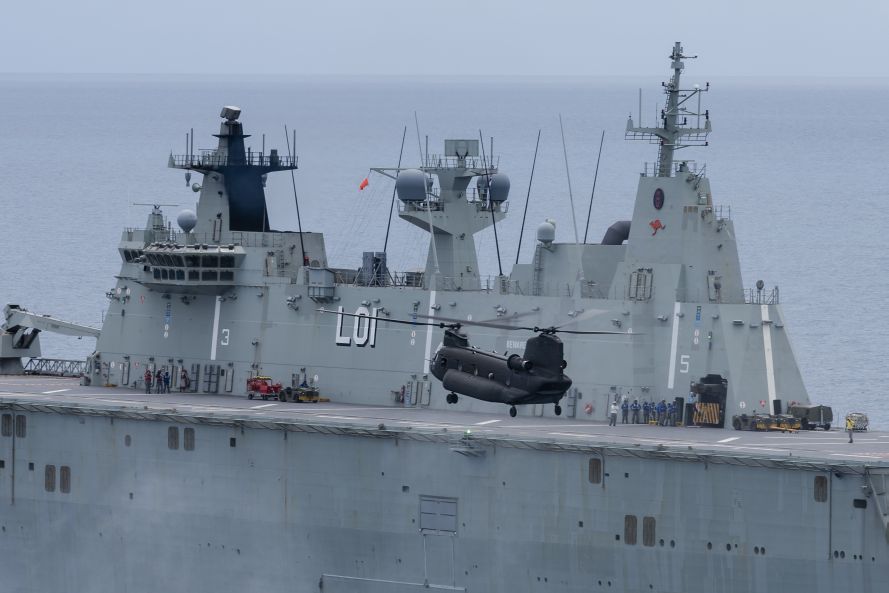 A Republic of Singapore Air Force CH-47 helicopter landing on HMAS Adelaide as part of Exercise ‘Sea Wader 2020’. (Commonwealth of Australia/Department of Defence)

A Royal Australian Navy (RAN) Canberra-class amphibious assault ship has embarked a Republic of Singapore Air Force (RSAF) CH-47 heavy-lift helicopter on its flight deck for the first time, marking a new level of interoperability between the two armed forces.

The aircraft underwent deck landing qualification on HMAS Adelaide (L 01), the RAN’s second Canberra-class vessel, as part of Exercise ‘Sea Wader 2020’, which took place off the coast of Queensland, Australia.

“The ability to operate our largest amphibious vessels with Singapore’s CH-47 Chinook helicopters means we can work together to mobilise and move personnel or supplies at sea, and enhance our combined joint capability”, said Linda Reynolds, Australia’s Minister for Defence, in a statement on 25 October 2020.

“Singapore maintains an ongoing number of CH-47s at Oakey. These are the same aircraft that came to Australia’s aid during the 2020 bushfire emergency, underscoring the utility of being able to operate with Singapore in a crisis. We will always be grateful for Singapore’s assistance during our time of need”, she added.

Besides the CH-47, other known foreign military aircraft that have landed on the Canberra-class ships include the US Marine Corps’ (USMC’s) Sikorsky CH-53E Super Stallion heavy-lift helicopter and MV-22 Osprey tilt-rotor aircraft. These aircraft types made their first landings on the first-of-class, HMAS Canberra