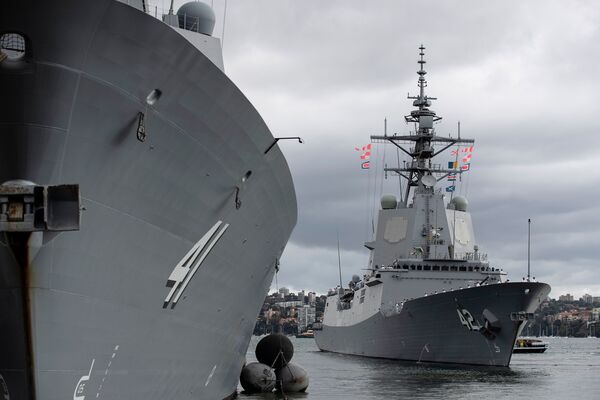 HMAS Sydney (in the background) departing its home port at Fleet Base East, Sydney, on 11 March to trial its Aegis Weapon System with the US Navy. (Royal Australian Navy/Commonwealth of Australia )

The milestone was announced by the Australian Department of Defence (DoD) on 13 August and given that Sydney is the final vessel of its type, the occasion also signifies that the entire warship class is now ready for operational deployments.

Sydney returned to Australia in July 2021 after completing a series of evaluations, which included missile firings against low-altitude and supersonic targets, in waters off the coast of Canada and the US for about four months.

RAN chief Vice Admiral Michael Noonan described the milestone as a new era for the navy. “Navy's three Hobart-class destroyers use a number of systems in common with the US Navy, which allows our ships to be fully interchangeable with the most advanced allied naval force in the Indo-Pacific region,” said the admiral in the DoD announcement.

Sydney was commissioned in May 2020 and left Australia in March 2021 for its combat systems ship qualification trials (CSSQT), which was done in partial fulfilment of achieving FOC. This CSSQT is similar to the regime undertaken by its sister ships, HMAS Hobart and HMAS Brisbane , in 2018 and 2019 respectively.

The Hobart class is equipped with the Aegis combat system and its sensors include the Lockheed Martin and Raytheon AN/SPY-1D(V) phased-array radar and the Northrop Grumman AN/SPQ-9B surface-search radar.

Weapon systems that were evaluated at Sydney