Australian shipbuilder Austal announced on 22 July that it has begun work on the second of six ‘evolved’ Cape-class patrol boats on order for the Royal Australian Navy (RAN).

The company said in a statement that “plate cutting” for the 58 m-long vessel was completed “less than 12 weeks” after it secured a AUD324 million (USD231 million) contract from the Department of Defence (DoD) in Canberra for the construction and supply of the six boats (hulls 811–816). 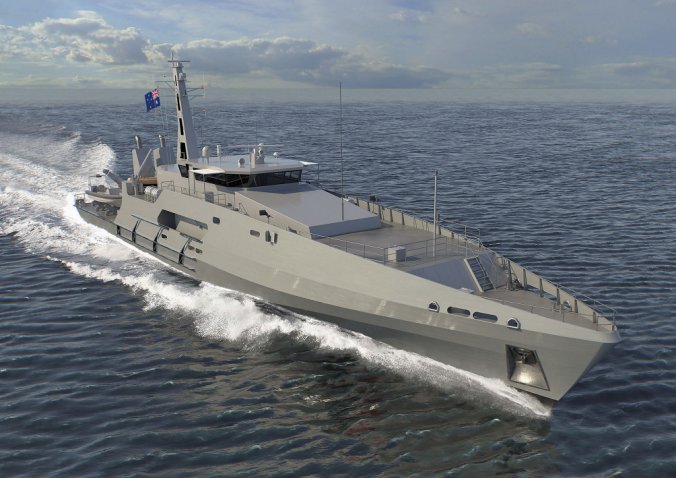 A computer-generated image of a Cape-class patrol boat. Austal announced on 22 July that it had “cut metal” for the second of six ‘evolved’ boats of the class for the RAN. (Austal)

Announcing the contract award on 1 May, Australian defence minister Linda Reynolds had said that the vessels “will play an important role in keeping Australia’s borders safe, while [the] navy’s new capability [12 Arafura-class offshore patrol vessels] is brought online”.

“These vessels will not only enhance national security but will [also] provide important economic stimulus and employment continuity during the Covid-19 coronavirus pandemic,” added the minister at the time.

The Australian Border Force currently operates eight Cape-class boats, while the RAN operates two leased vessels of the class: Cape Fourcroy, which was delivered to the service in May 2017, and Cape Inscription, which was handed over in July 2017.

Austal said that the ‘evolved’ Cape-class boats, which are based on the company’s 58 m-long aluminium monohull design, would include several enhancements to extend the capability of the vessels. Crew capacity will be increased by 10 people to a total of 32, and “quality-of-life provisions have been enhanced, ensuring those who operate the new Capes have WIFI connectivity to the outside world regardless of the operating environment”, said the company.

Australian shipbuilder Austal announced on 22 July that it has begun work on the second of six ‘evol...