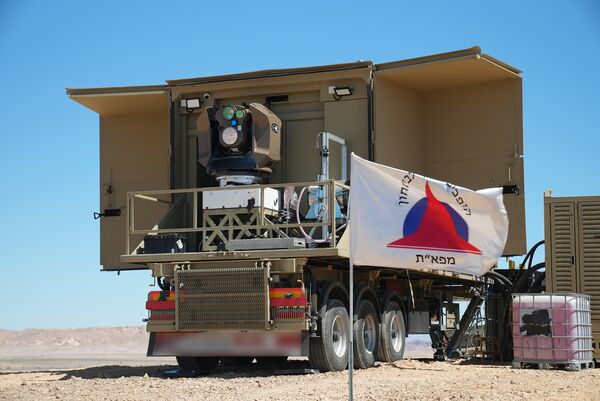 The laser system used in early 2022 trials was the Iron Beam prototype previously seen at a Rafael facility. (Israel Ministry of Defense)

Rafael and the Israeli Ministry of Defense (IMoD) want to have a 100 kW-class ground-based laser ready for fielding in the next couple of years that can assist Iron Dome intercepting unmanned aerial vehicles (UAVs), mortars, rockets, and anti-tank missiles in flight. The duo does not have an agreement with the US government to work together on the weapon yet, but Rafael will be at this year's Association of the United States Army (AUSA) convention showcasing the new capability.

Michael Lurie – the vice-president and head of the land manoeuvre systems directorate at Rafael, and the incoming CEO of Rafael USA – spoke with Janes on 30 September about Iron Beam development ahead of the annual conference in Washington, DC.

“We think the system will be the first operational high-energy laser system, not because we're the most advanced technologically … there are other US companies and probably other countries that are technologically very developed, but [Israel has] a very urgent need,” he said.

The idea behind the new laser weapon is to create a capability that is complementary to the fielded Iron Dome system. However, instead of only relying on the launcher and Tamir interceptors to down incoming threats, the Iron Beam laser could be used for a cheaper per-unit kill.

“The command-and-control is Iron Dome. The detection is Iron Dome. The decision-making is Iron Dome [for] shoot, don't shoot, and what to shoot,” Lurie said. “It's not instead [of Iron Dome], it's complementary because there are certain scenarios when the Iron Beam will have a problem, like in foggy weather or when it's raining outside.”

Rafael and the Israeli Ministry of Defense (IMoD) want to have a 100 kW-class ground-based laser rea...