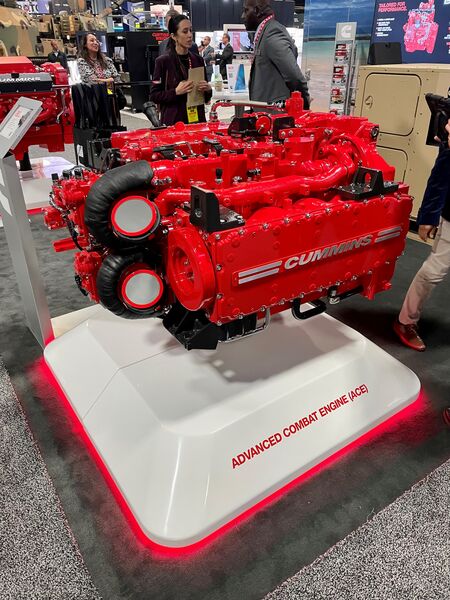 Cummins Advanced Combat Engine could become a common powerplant for the US Army combat vehicles from the Bradley to the Abrams. (Janes/Dan Wasserbly)

ACE is a GVSC-funded programme to create a modular, scalable diesel engine that can power a smaller combat platform similar to the Bradley infantry fighting vehicle up to the most power-intensive platform, the Abrams main battle tank, Anglin said.

The army awarded Cummins an USD87 million contract in July 2021 to complete ACE's development. That ‘other transaction authority' contract built upon a competitive multiyear GVSC effort to develop new powertrain technology. “The OTA allows for transitioning the new technology into the next generation of vehicle programmesahead of the programmes' launch dates,” Cummins said in a statement.

ACE is tied to the army's Optionally Manned Fighting Vehicle (OMFV) programme, which is slated to become the first platform to host the common engine, Anglin told Janes. The OMFV is in a concept design phase, and ACE is therefore not expected to be in full production until the 2026–28 timeframe.

ACE's layout options enable the engine to be configured in 3-cylinder, 4-cylinder, and 6-cylinder arrangements to deliver power ranging from 750 to 1,500 hp. “ACE can be integrated into hybrid architectures enabling commonality, thereby eliminating the expensive logistical burden of having multiple combat powertrains and facilitating the incorporation of new electrified technologies,” Cummins added.