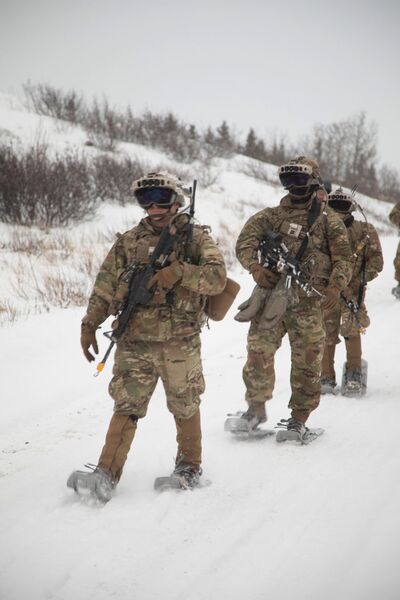 Earlier this year US soldiers conducted IVAS cold-weather testing at the Army Test and Evaluation Command's Cold Regions Test Center at Fort Greely, Alaska. The service has since ‘paused' the programme. (US Army )

US Army officials have halted plans to field a militarised version of Microsoft's HoloLens 2 augmented reality (AR) system to soldiers, placing a contract worth up to USD21.9 billion in jeopardy, Janes has learned.

The Assistant Secretary of the Army for Acquisition, Logistics and Technology's (ASAALT's) office paused the service's Integrated Visual Augmentation System (IVAS) and is “essentially doing a reset of that programme, figuring out what is the appropriate timeline and where is the technology”, Brigadier General William Glaser, director of the Synthetic Training Environment Cross-Functional Team, told Janes on 12 October.

Several other army officials confirmed the decision but, as of this writing, ASAALT, Program Executive Officer Soldier, and Army Futures Command offices had not responded to Janes request for additional information about what sparked the decision and what impact it might have.

However, in June Janes spoke with Program Executive Officer Soldier Major General Anthony Potts and IVAS Product Manager Colonel Troy Denomy about the effort. At the time, the duo said the army would convene a ‘user jury' on 12 July to evaluate the latest IVAS iteration ahead of operational testing later in the month. Army leaders were then expected to make a fielding decision sometime between September and December, which is seemingly when they decided not to outfit soldiers with the capability right now.

US Army officials have halted plans to field a militarised version of Microsoft's HoloLens 2 augment...