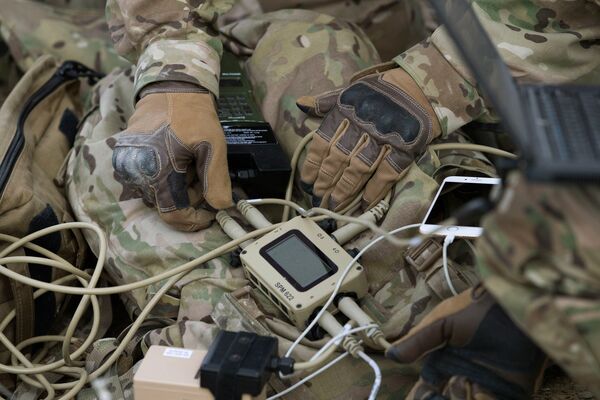 The US Army has purchased Galvion's Squad Power Manager (SPM) kit to be included in its Explosive Ordnance Disposal (EOD) Tools and Equipment Kit, the company announced at the Association of the United States Army (AUSA) conference.

The SPM kit is designed to “take the power you have and give it to what you need”, Chris Bonni, Galvion Active Systems project manager, told Janes ahead of the conference. Once various devices are plugged in, the SPM can prioritise what to power or charge first. For example, most users have it set up to charge mission-critical gear first, and mobile phones last.

An SPM kit is a canvas bag with various pockets, customised for each user's required cables. The SPM itself weighs about 1 lb, and the accessory cables are either input, output, or bidirectional, Bonni said. Specific cables may be set up for scavenging solar power or vehicle power, or with common alligator clips to attach to a larger battery, or a cone that can slide on to a rechargeable cordless tool battery pack.

Marnie Blanshay, director of marketing and communications, said the company has approximately 200–250 cable options that are selected depending on mission needs and any new equipment to account for.

SPM is “a core element of Galvion's Nerv Centr Active Systems range, which provides scalable power and data solutions to the dismounted soldier”, the company noted.

The US Army has purchased Galvion's Squad Power Manager (SPM) kit to be included in its Explosive Or...