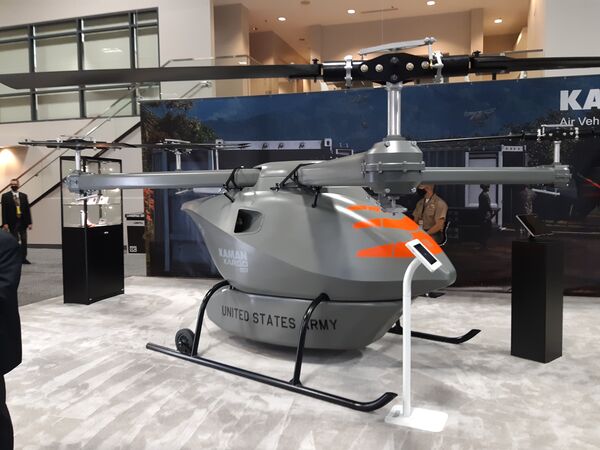 A full-scale model of Kaman Air Vehicles' Kargo heavy-lift autonomous quadcopter UAV on display on 13 October 2021 at the AUSA annual convention in Washington, DC. The company unveiled the aircraft at the event. (Janes/Pat Host)

Romin Dasmalchi, Kaman Aerospace senior director of business development and government relations, told Janes on 13 October at AUSA that the aircraft is designed to support future US Army and US Marine Corps (USMC) operating concepts such as Expeditionary Advanced Base Operations that imply austere conditions and forward deployment. Kaman Air Vehicles wants the Kargo to provide the US armed services logistics options so that they are not using expensive aircraft such as the Bell Boeing V-22 Osprey tiltrotors to fly cheap cargo for short distances.

Dasmalchi said the Kargo will have a cost-per-flight-hour on par with a commercial helicopter that runs a 300 hp engine such as a Robinson R66.

The payload can be carried in a conformal pod, an external slingload, or the Joint Precision Airdrop System. The body of the aircraft is an aeroshell that surrounds a basic frame designed to house a 300 shp jet fuel engine and the company's proprietary transmission design and drive train. Dasmalchi said there is also a lot of open space inside the aeroshell.

On 14 November 2021 RADA announced the receipt of USD5 million for an initial pre-order of its exten...

The US Naval Sea Systems Command (NAVSEA) has established a new team focused on preventing future in...
Request Consultation