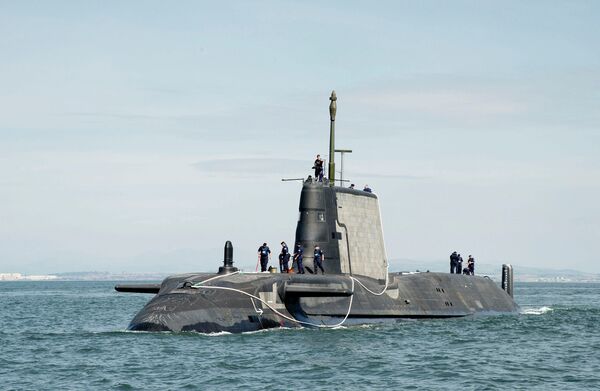 HMS Artful , the UK Royal Navy's third Astute-class SSN seen here in a file image. Artful has been identified as the Astute-class submarine that sailed into Busan, South Korea in August 2021 as part of CSG21. (BAE Systems)

The vessel's arrival was announced by the Royal Navy's Fleet Commander, Vice Admiral Jerry Kyd, on 12 August via an official social media channel. “An SSN provides our UK carrier strike group with some serious firepower and special capabilities,” he said in the post.

Vice Adm Kyd also disclosed in an earlier post that the lead vessel in CSG21, HMS Queen Elizabeth , is currently on a stop in Guam “after weeks at sea conducting flying operations with allies from the Mediterranean to the South China Sea”.

The admiral did not give further details on the Astute-class submarine that has entered Busan but South Korean news agency Yonhap has identified it as HMS Artful , the third vessel in the class. According to the agency, the submarine sailed into Busan on 11 August to receive supplies, and it will be joined by Queen Elizabeth in the later part of the month at the same port city.

CSG21 will also eventually join ships from the Republic of Korea Navy (RoKN) for training operations, but the navies are still discussing details of these, said the Yonhap report on 12 August, citing South Korea's Defense Ministry spokesperson, Pu Seung-chang.