The Uralvagonzavod (UVZ) affiliate in Rubtsovsk presented an upgraded BMP-1AM infantry fighting vehicle (IFV) called Basurmanin at the Army 2021 defence exhibition held in Kubinka near Moscow on 22–28 August. UVZ told Janes on 24 August that the upgraded BMP-1AM has been supplied to the Russian Ground Forces since 2019. The enterprise showed several upgraded BMP-1AMs at various Army 2021 sites. 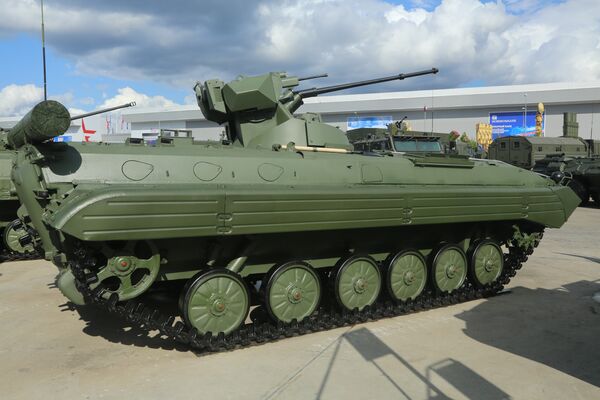 The upgrade is being carried out by the Arzamas Machine-Building Plant and the 81st Armour Overhaul Plant in Armavir under the second three-year contract with the Russian Ministry of Defence following the completion of the first three-year contract signed in 2018.

Basurmanin is an economical upgrade that extends the lifetime of old BMP-1s by 10 years. Russian warehouses contain up to 1,000 BMP-1s that were decommissioned from the Russian Ground Forces in the 2010s. Replacing them with the same number of BMP-3s will cost about RUB82–86 billion (USD1.1–1.2 billion), based on the price of vehicles procured in 2019, according to open source reports.

The BMP-1AM has a BTR-82A combat compartment with a 2A72 30 mm automatic gun, PTKM 7.62 mm co-axial machine gun, fire control with a combined universal day and night TKN-4GA-01 anti-aircraft sight, a two-plane digital gun stabiliser, and an anti-tank missile system. The Metis 9K115 anti-tank missile is used against armoured targets.

The old R-123M radio station was replaced by a modern R-168-25U-2 radio of the Akveduk digital system, which provides continuous protected radio communications to tactical units.