Rostec's Russian Helicopters presented the upgraded Mi-171Sh Storm helicopter at the Army 2021 defence exhibition being held in Kubinka near Moscow from 22–28 August. Russian Helicopters said in a press release on 21 August that the aircraft had taken five days to fly the 5,000 km from its aviation plant in Ulan-Ude in eastern Siberia. 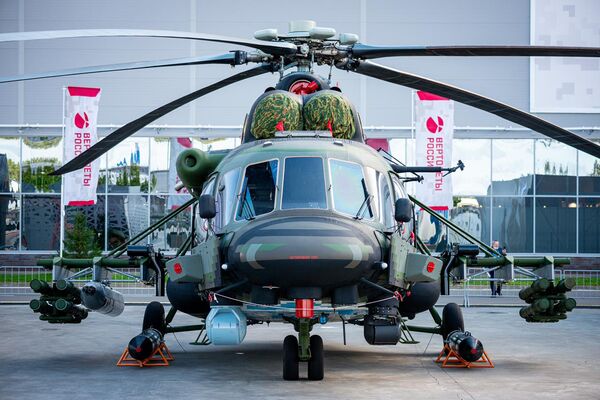 Ulan-Ude Aviation Plant managing director Alexey Kozlov said the helicopter's combat effectiveness and survivability had been significantly increased, with Russian Helicopters adding that feedback from crews, maintenance personnel, and commanders on how to improve the aircraft had been taken into account.

The company said the helicopter is specially designed for special forces missions and is powered by engines for high-altitude flights. It also features a new rotor system with improved-profile composite main rotor blades and X-shaped tail rotor, an integrated flight and navigation system, and improved weapon suite and defence systems.

The Mi-171Sh Storm has improved armour protection on the fuselage and its onboard defence system (ODS) can detect launches of anti-aircraft missiles with infrared and thermal homing heads, and jam them or deceive them with decoys, according to Russian Helicopters. The ODS can also detect enemy radars and determine their type, the direction of their emissions, and their operating mode.

The crew, troops in the cargo cabin, and vital components are protected by a combination of titanium and aramid armour, with detachable lightweight kevlar armour on the cabin floor and on both sides of the helicopter up to the windows. In addition, the helicopter has energy-absorbing seats designed for hard landings.