Russian company Kronshtadt has taken the opportunity at the Army 2021 exhibition being held in Kubinka near Moscow on 22–28 August to showcase a full-scale mock-up of its Grom (Thunder) unmanned aerial vehicle (UAV) with two Kh-58UShKE anti-radiation missiles.

Company officials told Janes that the Grom has a maximum take-off weight (MTOW) of 7,000 kg with a payload capacity of up to 2,000 kg. The air vehicle can operate out to a distance of 800 km when equipped with two Kh-58UShKE missiles, which weigh a total of 1,300 kg. However, maximum range decreases to 700 km when fully laden. 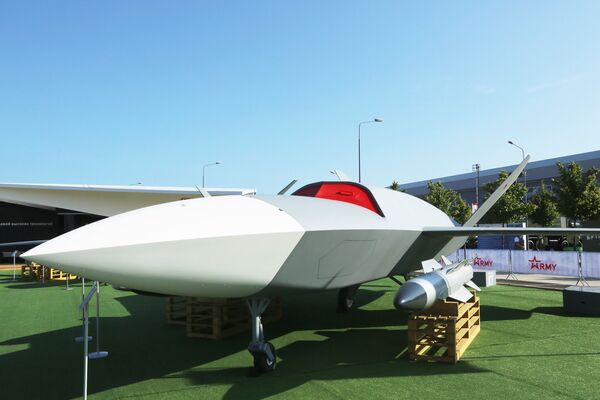 Kronshtadt explained that the air vehicle can carry a range of ordnance using its two underwing hardpoints and two hardpoints within its internal payload bay.

The Grom will also be capable of carrying Kh-38 air-to-surface missiles. Kronshtadt displayed the 520 kg Kh-38MLE laser-guided missile next to the mock-up, although it is understood that the entire range of modular Kh-38ME missile can be used. The range comprises four missiles with various warheads – such as high-explosive fragmentation and penetration – and guidance systems: inertial with satellite navigation (Kh-38MKE), inertial thermal imaging (Kh-38MTE), inertial active radar (Kh-38MAE), and inertial laser (Kh-38MLE). The missile type can engage targets at speeds of more than Mach 2 out to a maximum of 70 km.

Russian company Kronshtadt has taken the opportunity at the Army 2021 exhibition being held in Kubin...