Long-range weapons are increasingly being used by Armenian and Azerbaijani forces as fighting continues to rage around the disputed enclave of Nagorno-Karabakh. 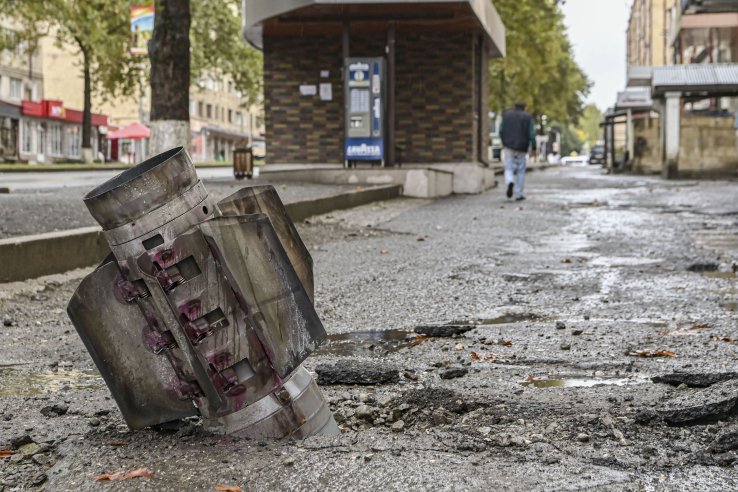 A Smerch rocket motor in Stepanakert on 6 October. (Aris Messinis/AFP via Getty Images)

Long-range rocket systems and armed unmanned aerial vehicles (UAVs) have been to the fore in the latest round of conflict that broke out on 27 September, with both sides striking targets behind the immediate combat zone.

Since 1 October Azerbaijani forces have been regularly attacking Stepanakert, the main city of Nagorno-Karabakh, with BM-30 Smerch rockets, which have a range of some 90 km, and armed UAVs, according to news reports from the city. Imagery from the city showed the remains of several BM-30 rockets embedded into civilian buildings and residential streets.

In retaliation, Armenian forces fired BM-30 rockets towards the Azerbaijani airfield at Ganja. Video footage was posted online showing large rockets hitting the city of Ganja on 5 October and still imagery emerged showing the remains of several BM-30 rockets embedded in the ground around the city on 4 October.

Azerbaijani ground forces have been attacking along the length of the confrontation line around Nagorno-Karabakh in a bid to drive Armenian troops back into Armenia proper.

Both sides have been keen to promote the effectiveness of the operations by publishing video clips of air, missile, and artillery strikes. The Azerbaijani images are predominately from UAVs and show Armenian tanks, artillery, and troop positions being attacked from the air, while the Armenian footage is largely filmed from ground positions and shows anti-tank guided missiles and artillery striking advancing Azerbaijani troop columns.

Long-range weapons are increasingly being used by Armenian and Azerbaijani forces as fighting contin...