A new project funded by the US Army Research Office (ARO) is developing augmented reality (AR) goggles to guide military working dogs in an effort to increase personnel safety.

Command Sight, a company focused on human-animal communication, received funding from ARO – part of the US Army Combat Capabilities Development Command’s Army Research Laboratory (ARL) – to develop a prototype of the AR goggles. The research was funded through the Small Business Innovation Research (SBIR) programme.

The dogs are trained to respond to laser pointers, which handlers can use to guide the dogs to positions when scouting areas for explosives, assisting in rescue operations, or a range of other activities. Simulated laser pointers are then presented to the dog’s field of view through the goggles, with AR enabling computer-generated imagery to be inserted over a real-world scene.

Stephen Lee, a senior scientist at ARO, said the technology had been driven primarily by evolutions in the commercial sector, notably the use of drones, which has fuelled the development of lightweight electronics and smaller cameras that can be carried comfortably by a dog. 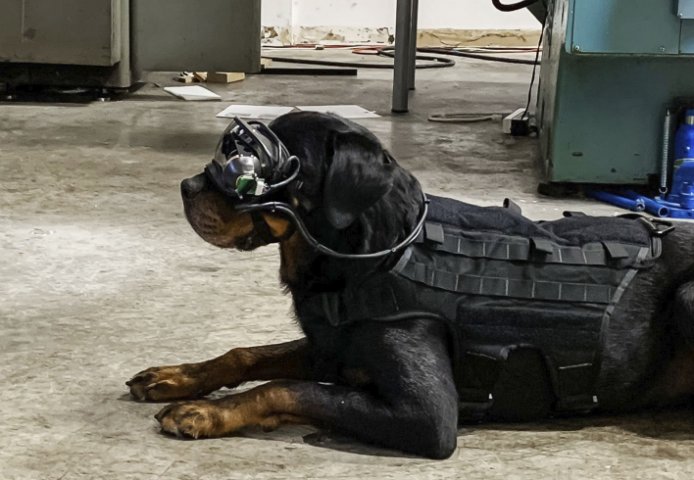 Using the goggles, dogs are trained to respond to laser pointers that handlers can use to guide them to certain positions. (Command Sight)

“The fascinating thing is that this may open up new opportunities for guiding and working with dogs and to develop their capabilities,” Lee told Janes.

AJ Peper, founder and CEO of Command Sight, said the goggles had been made possible by more affordable technology, such as miniaturised single-board computers.