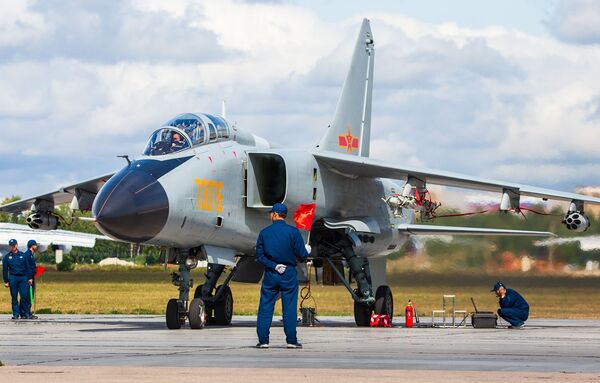 A PLAAF JH-7 aircraft, presumed to be the JH-7A2 variant, photographed in early August 2019 during the Aviadarts competition of the International Army Games held in Russia. The upgraded variant was displayed to the public at Airshow China 2021 in Zhuhai. (Russian Ministry of Defence)

The People's Liberation Army Air Force (PLAAF) has, for the first time, displayed to the public an upgraded variant of the Xi'an Aircraft Corporation's JH-7A fighter-bomber.

Known as JH-7A2 (also spelled JH-7AII), the new variant was showcased at the outdoor exhibition area of Airshow China 2021, which was held from 28 September to 3 October in Zhuhai.

The aircraft was seen carrying several pods, including the KL700A (also known as the KG700) electronic countermeasures (ECMs) pod on an outer wing pylon and the bigger and heavier KG800 ECM/jammer pod on the inner wing pylon. These pods had previously been seen on the JH-7A aircraft, however, they had not yet been displayed to the public.

The JH-7A2 was also shown carrying a targeting pod designated K/JDC03A, which is similar in appearance to the standard K/JDC01 laser targeting pod used to designate targets for LS-500J laser-guided bombs.

According to a report by the Global Times newspaper and the information provided at the exhibition, the JH-7A2 also features improved ground attack capabilities as it can carry additional weapons, such as stand-off air-to-surface missiles, and munitions dispensers. However, neither the exact names nor the models of these weapons were revealed.

Reports about the JH-7A2 first emerged in early August 2019 when the state-owned Xinhua News Agency wrote that several aircraft of the type took part in the Aviadarts competition of the International Army Games that same year in Russia.

The People's Liberation Army Air Force (PLAAF) has, for the first time, displayed to the public an u...