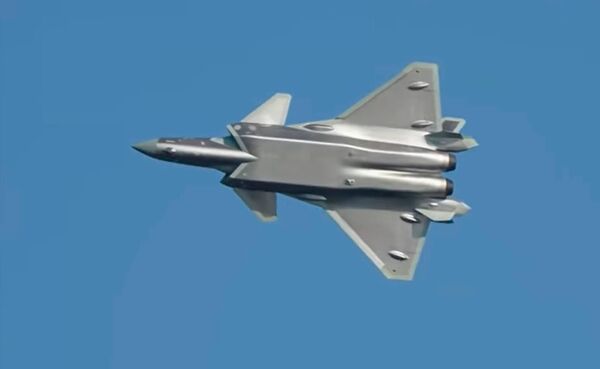 A screengrab from footage released by CCTV on 26 September – two days before the start of the Airshow China 2021 defence exhibition – showing a J-20A fighter aircraft in flight fitted with locally developed WS10C engines. (CCTV)

Two examples of this variant were shown during an aerial display that marked the beginning of the Airshow China 2021 defence exhibition, which is being held from 28 September to 3 October in Zhuhai.

Based on available imagery, the two J-20As featured WS10C turbofan engines, but they did not bear serial numbers on their tails, thus making it difficult to determine which unit they are assigned to.

Since about September 2019 several J-20As have been spotted at CAIG's production facility in Chengdu-Huangtianba featuring indigenous WS10C turbofans, which have replaced the type's initial Russian-made Saturn AL-31FN-series engines.

The new engine features serrated afterburner nozzles to enhance the fighter's stealth capabilities, and is understood to deliver a thrust of about 142 kN, an improvement over the previous AL-31FN-series engines.

Images from a PLAAF promotional recruitment video released in January 2021 suggested that the J-20A variant fitted with WS10C engines had already entered service with the 172nd Air Brigade at the Flight Test and Training Base at Cangzhou-Cangxian in Hebei Province, which is under the PLA's Central Theatre Command. However, it is unclear how many of these upgraded aircraft have been assigned to the unit.

The brigade, which received standard J-20s in 2017, is the initial unit for training instructors and developing training material.

The People's Liberation Army Air Force (PLAAF) has, for the first time, demonstrated to the public a...