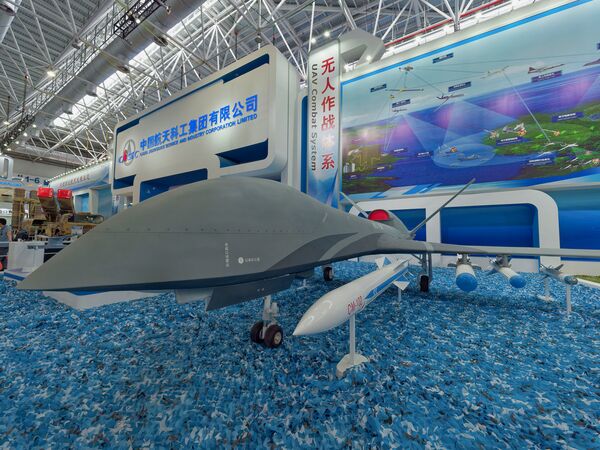 CASIC's WJ-700 Lieying medium-altitude long-endurance UAV seen at Airshow China 2018 with a range of air-to-ground and air-to-surface missiles. The company is proposing that the WJ-700 be used as a stand-off missile launch platform using targeting cues from the stealthy Tianying reconnaissance UAV. (Janes/Kelvin Wong)

China Aerospace Science and Industry Corporation (CASIC) used Airshow China 2021, which was held from 28 September to 3 October in Zhuhai, to highlight a production-ready version of its WJ-700 Lieying (Falcon) medium-altitude long-endurance (MALE) unmanned aerial vehicle (UAV), which the company is pushing as an integral part of its new Unmanned Combat System network.

First unveiled during Airshow China 2018, the turbofan-powered WJ-700 has a stated maximum take-off weight (MTOW) of 3,500 kg and an endurance of up to 20 hours, is a development of CASIC's UAV Technology Institute, and is being marketed by Hiwing General Aviation Equipment, the commercial arm of CASIC's Third Academy, which specialises in the research and development and production of cruise missiles, and has since expanded its portfolio to include UAVs.

Unlike the vehicle-launched, cruise missile-like form factor of the company's WJ-500, WJ-600, and WJ-600A/D armed reconnaissance UAVs, the WJ-700 adopts a more conventional monoplane design with an aerodynamically streamlined fuselage. It measures about 9–10 m in length that supports a retractable tricycle undercarriage, with the main landing gear retracting inward and the nosewheel forward.